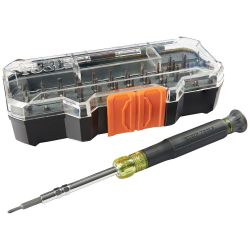 Acme tools just got these in, they didn’t have a shelf tag yet for them.

I was in need of a t6 security bit for a 2014 Mac Mini service, everyone local was sold out, apparently it’s what Ring doorbells are now using. This bit set has one.

Made in Taiwan, in a nice plastic case, two ended shaft to adjust length. Magnet seems to be a little stronger than the 4-in-1 Klein “electronics” screwdriver I bought a couple years ago that lets the bit fall out too easily. Usually I go for Wiha driver sets, I don’t like bit sets for this reason. But there doesn’t seem to be any t6 security drivers that are decent manufacturers. I have yet to use a driver with a bit set that gives me the tactile feedback I want to feel when working on electronics. That tiny wiggle and loose tolerance on the bit destroys the fine touch I need when working on really fragile aluminum threads in a thin sheet metal plate like the bottom case screws on a Mac Mini. There’s only about 1/2 turn of engagement to those screws and if you strip out one of the three that mount the plastic bottom cover you’re screwed. See what I did there?

There should be a review…

My only squawk and it’s minor, is “made in Taiwan” I would like to see it made in USA and would pay for it. It’s the same squawk I have about the Wiha “made in Germany”. I won’t buy it if it says “made in China”.