Alright so I’m about to take my first stab at building a table - this will lead to making 4 other table top like things after. (side table first, kitchen, bedside,?)

SO anyway first one up is going to need roughly 14-16 inch width table top at 18-20 inches long. SO I was asking a guy I know about using his planner to get them even. Then I was going to biscuit join - and use an electric hand planner to level the joint with the boards to even it out.

Trying my hand at using my table saw as a joiner of sorts to square the boards and even the edges. My coworker said I was working too hard. He suggested cutting the boards to just under 6 inches wide - putting them vertically through his planner to act as a joiner - then flip and plane once or twice to keep even. Then biscuit them - and a sander will be all that’s needed for the rest.

SO my 2 questions to the group - if you were to buy a benchtop planner today what would you get and would you consider the new WEN device. 3 blade, 13 inch wide.

Second question have you or would you consider putting boards on edge though one?

I like the idea the more I think about it

If I had the talent/skill and patience - I suppose that I could have done all the table tops that I made by hand. Craftsman made quality tables with nice flat tops and finely matched joints long before machine tools were available.

If I were buying a benchtop planer today - it would be a Dewalt DW735. I have a Makita but feel that snipe is a bigger issue with the Makita than the Dewalt (or so I hear - not having personally made a side by side comparison). Either one is a thicknessing tool - not needed if you are using finished wood that you do not need to mill down to thickness.

My shop also has an old Delta (37-070) 8 inch lointer for cleaning up and truing edges - but I’ve played with hand-planed spring joints that have worked well.

While I have used a variety of edge aligning and strengthening techniques (Dowels, Biscuits, splines, Dominos) - over the years - my last few table/cabinet to projects used just spring joints. I still like Dominos better than biscuits in many situations - but the my investment in a Festool Domino XL machine - plus tooling from Seneca - will likely never pay off in real dollars and cents terms. I did like using dominoes on a few big hardwood doors that I made.

I’m also blessed with a wide (22 inch) drum sander that I can use fro surfacing panels - but you can also clean up table tops using a combination of scrapers, hand planes and sanders (ROS and/or belt sanders for powered tools)

Thanks. I don’t have the equipment to make a spring joint from what I read. I guess I would wiggle/flex it on a table saw but otherwise I’d be free handing that with a jig saw.

On the planner bit I was thinking the of the Wen to save some money as it wouldn’t get used every day. It seems like a very capable too. My co-worker on the other hand has the older model Dewalt - and his first words were “if you buy one get a 3 blade”. So the new WEN ticks that box too. The Dewalt does look better designed and I suspect it runs smoother. so 320 vs 500+.

But you’ve got me thinking about my first other thought - get something akin to the Jet Benchtop jointer - which is a 6in joiner/planer. or the 8 inch if I Could swing it. I was thinking about that too.

I also thought about using this project as a guide point to buy a jack plane. as I think I want one for something.

Thanks for the insights.

WEN tools confuse me. Some seem absolutely amazing, especially for the price, while others appear to be absolute garbage. The planer, from what I’ve seen falls more into the great for the price group, but I’d be concerned about longevity especially for a fairly expensive tool. I’ve seen the Dewalt come down to $450 on sale, so if I had the time, I might track the price on that and spend the little extra. 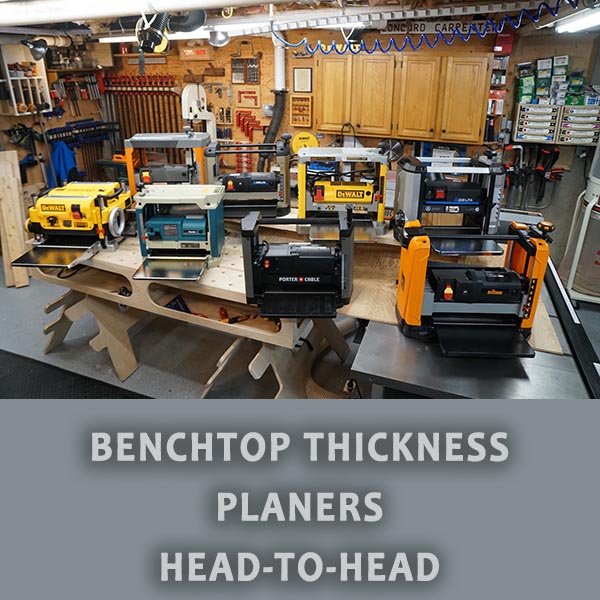 Best Benchtop Thickness Planer Benchtop thickness planers are an essential piece of equipment for any woodshop. These planers are an excellent option for small home woodshops and contractors that need a portable option. While not big and powerful as...

I’m so happy that I found and bought my Powermatic #100.