What are your thoughts on the best “compound action” pliers? I’m after pliers for general use that multiply force.

In the blue corner, Irwin offers High Leverage Linesman Pliers. I no longer expect top quality from Irwin, but the High Leverage pliers are made in Germany (by NWS, I think). These are merely high leverage, however, not compound leverage.

In the yellow corner, DeWalt offers true compound leverage with its cleverly named Compound Action Pliers. Who’d have guessed what these do? However, these have all but disappeared from DeWalt’s website and very similar pliers have mysteriously appeared on Stanley’s website. I still like the look of these pliers, but their jaws only open to 10mm. (That’s less than half an inch in America

What other options have I missed? Kobalt Compound Leverage Self-Adjusting Pliers, anyone?

Before you can say pliers wrench, I’m not looking for smooth jaws. I want real teeth!

Those Stanley pliers have been around for some time - I posted about them on TG last year, and haven’t noticed the Dewalt pliers becoming more scarce since then.

You can still them at Home Depot.

I guess it might be different overseas. If you ask me, I’d rather have those Stanleys over the Dewalts. 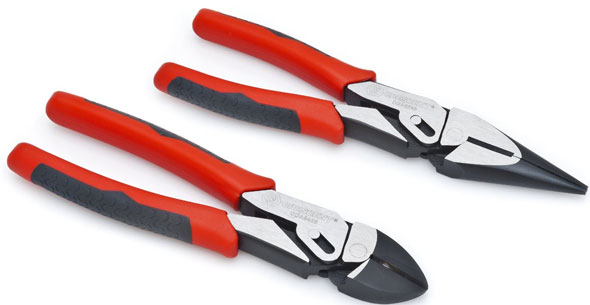 Compound leverage isn’t quite the same as compound action, though.

And if it’s Gearwrench or Crescent vs. Stanley, I’d go for those Stanleys. It’s a shame the Stanleys aren’t offered in the USA (yet?).

I have the Crescent Compound leverage cutters Stuart listed above. I haven’t used them a ton, but they haven’t let me down yet. I’ve cut some piano wire, staples, and a bunch of hardened nails no problem.

As for durability, I’m guessing that the pliers version isn’t going to take a much of a beating as a cutter.

I’m not sure how good they are though.

Hi Stuart, why would you pick Stanley over DeWalt pliers? Isn’t DeWalt was the higher quality brand? I thought DeWalt > Stanley Fatmax > Stanley. Last time I was in my local store, however, I found it hard to tell any difference between DeWalt and Fatmax hand tools. I’m confused!

Many thanks to one and all for the info. I didn’t know Crescent and Gearwrench did these; both are harder to find in Europe, but that’s what internet shopping is there to solve

Dewalt is typically a higher tier brand, but Stanley FatMax quality sometimes comes close, and there are some tools that are dual branded, blurring the lines.

I haven’t tried either, but I have a hunch that the Stanleys are as well made, or better made, than those Dewalts.

Plus, I’m presuming that the Stanleys are more compact, and the handles possibly don’t open as wide as the Dewalts, which would be a good thing when you need to spread the jaws towards their upper limit widths.

I’ve got the long nose pliers in that line. They are pretty decent and have held up well with moderate use over the past few years. Can’t speak for the linesman pliers, though.