Has anyone else seen the recent Project Farm shootout on Hex Keys over on YouTube? Not that I want to promote another content creator on ToolGuyd but I found this one interesting because of the surprisingly poor showing by the PB Swiss set. I was shocked by how badly the PB Swiss set performed based on the things I’ve read about them on ToolGuyd. I don’t have any personal experience with the PB Swiss set; I generally trust the Project Farm channel and I’ve never been steered wrong by ToolGuyd so I’m not quite sure what to think. Just wondering what if other people have had a similar reaction to the video. I’d love to know what Stuart and the Toolguyd crew think. 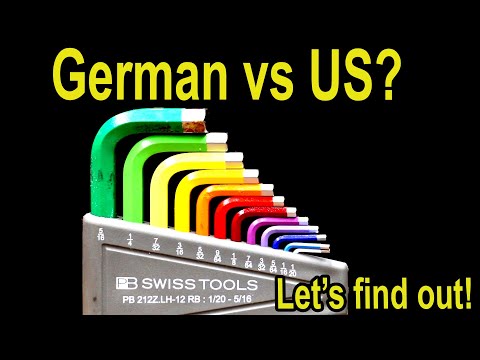 I have never watched a Project Farm video before, so this one is my first. I have used PB Swiss screwdrivers, but never their hex keys.
Most of my professional background came from working in, and then managing a materials test lab, at a major US university. I then went on to design and build my own metrology equipment which is in use by major corporations and universities worldwide. With that background I have MANY complaints with this testing:

The corrosion testing also appears to have a flaw: the wrenches weren’t cleaned first. As it stands the test is really confusing three variables: the quality of the finish on the metal, whatever rust inhibitor may have been applied at the factory, and however much those wrenches were handled by the tester. If you want to measure how good the factory coatings are then the wrenches need to be cleaned to remove any surface contaminants from manufacturing or from natural skin oils handing the tools prior to the test. For that matter, the wrenches and the sockets used for torque testing need to be cleaned as well lest any oil affect torque values.

The fit testing is also sloppy. Instead of giving us subjective feedback based on a bunch of different screws, why not measure the dimensions of the hex using a micrometer?

I’ve watched a few of those videos and I always have questions on their testing methodology and expected outcomes.

So I have a good bit of grief like the guy above with the test setup. I’m an mechanical engineer that plays with airplanes for background. anyway few bits that weren’t covered and setup wrong.

So chuck a bolt in a vise - what grade of bolt is that - that’s the material, what’s the actual hex size - I suspect it wasn’t actually 3/8 based on alot of that slop he had. I know for a fact my Bondhus, and the Wera and PB Swiss stuff I have used all fit rather tight - but as always with hex keys you need to fit check.

I don’t know how many times I see people grab SAE sized hex and try to work on something auto related or furniture assembly and complain about bad bolts when the items are actually metric. and quality hardware hex head have tighter tollerance. So no it’s possible that was a 10mm, or whatever.

Next the application - aside from his home made fixture - that’s not a the wrenches are designed to be used. one his force was offset and it was though the key. When used on the short side they are expected to be pushed into place down the shaft of the long side. different torque expectations but also proper alignment and retention. PUt another way - how many of those stripped fails wouldn’t have happened using the key the correct way? Did he use a new screw with each test? are the screws of quality - didn’t look like it.

Grade 8 machine cap screws should have been used to start with. (black oxide ones you’d get at fastenall or grainger or etc).

My experience german tools love their metallurgy - so it didn’t surprise me that they might be stronger by a bit. I have twisted and broken 2 bondhus keys in my useages - but for the cost I highly recommend them. and I’ve never had one be sloppy fit other than being the wrong size.

OH and PB swiss is not so much known for the strength of their bits but rather more the precision of the fit - the few times I’ve used their stuff I find that to be rather true.

It appeared that the torque test did very little damage to the hex keys themselves. This implies it was the fastener heads which were failing rather than the allen wrench. We’re supposed to be measuring the strength of the wrench, not the fastener.

Yeah, as a fan of the channel, this in particular was disappointing. He usually does a good job of breaking out these details, but not this time.

I think the key problem with this video is that he didn’t talk about variability in fastener geometry and materials, which might lead to different hex wrenches being better for different applications.

It really is puzzling why he picked those round headed stainless cap screws for the initial testing. Not only do those have very shallow recesses for the hex key to fit into, but the metal is much softer than a generic grade 5 steel bolt. That choice of “socket” to test the tool against could hardly have been any worse.

While I have no objective data, I have primarily used PB Swiss hex keys and found them flawless. They feel marginally nicer to use in my hands than their German equivalents, but YMMV.

I’m curious how the premium brands (PB Swiss, Wiha, Wera) compare. But it’s merely curiosity because, in regular usage, all three brands have always proven excellent for me. Is there anything to choose between them?

I don’t mean to speak badly of Project Farm. I know he’s really popular, and he is trying to fill a definite need.

But I can’t watch his videos. The results are presented in the same loud, nearly uninflected voice as the tiniest details about the products. It’s as if he doesn’t know he’s telling a story, which he is, or should be. It makes me wonder if he’s on the autistic spectrum.

The testing methods are presented (again in the same loud voice) without discussion or explanation, as if we’re not thinking people. To him, our thoughts and questions are irrelevant. He’s not engaging in a conversation with us. It gets tiresome and actually insulting after a while. Possible issues or problems are not considered or acknowledged. We’re supposed to swallow it all whole. Also, the testing often has little to do with how these tools are actually used, even in his own profession. (I’ve only seen a few videos so I could be wrong; correct me if I am.) For all we know, he could be an accountant or a computer gamer.

Contrast that with AvE. He is knowledgeable, but he doesn’t pretend to give objective comparisons. He just expresses his opinions and observations, with feeling (and profanity), but also grounded in his experience and knowledge. He also shows us his thinking in the moment (with all its flaws and mistakes), which Project Farm doesn’t at all.

I’m not an engineer or professional tester, so how to properly test this is better left to the previous comments. That said, provided all of the wrenches were subjected to the same tests and conditions- then the outcome is the outcome.

I personally enjoy Todd’s channel and have found his results to be of value to me.

I normally like the other video’s of project farm that I’ve seen but this one has some issues in testing method. and to be fair I find that to be true of others also so not to pick on them only.

And he got close - I mean at least there is a test and some info. but it’s a touch misleading too.

and bad hardware (screws, nuts etc) are a pain regardless.