I thought I’d start a thread here about the ‘chinese’ DD cyclone alternatives. As I said in the recent article comments, I’m going to order one of the “Adolla Sixth Gen” cyclones and give it a chance. I actually expect it to outperform the Oneida. 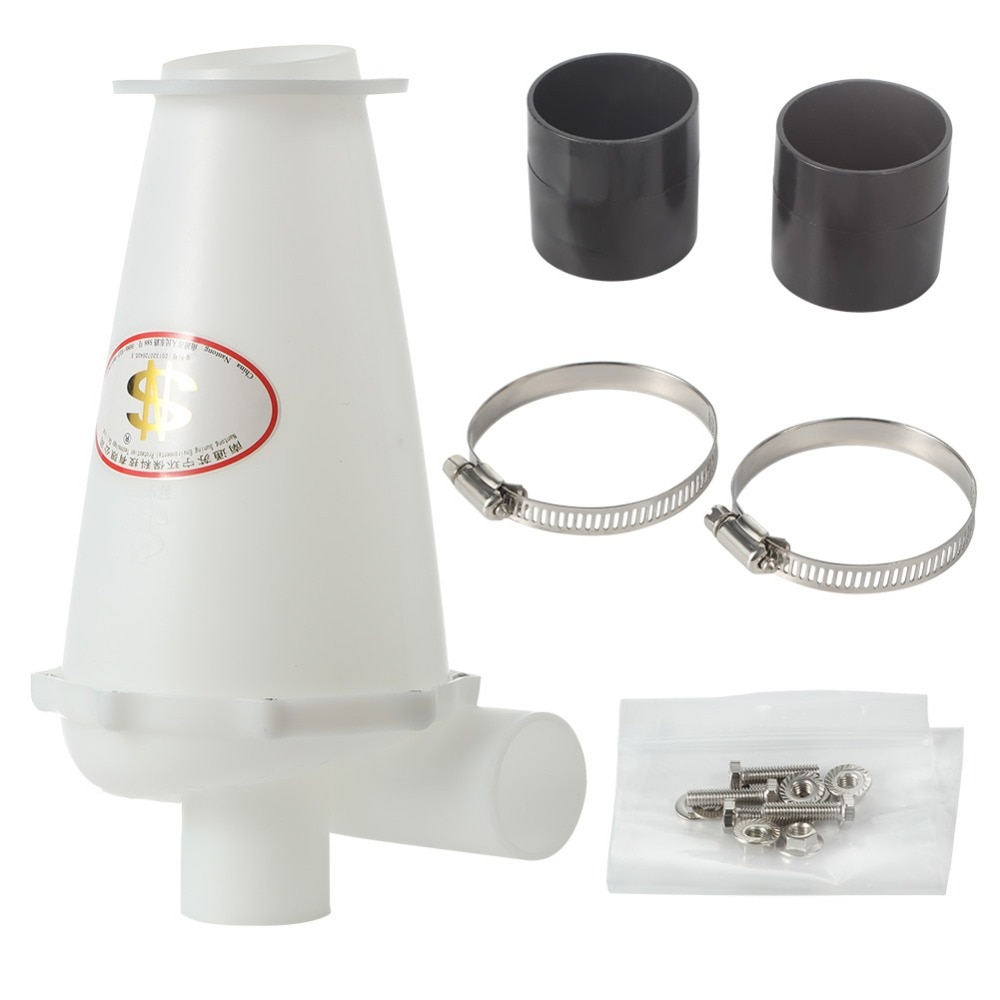 I think before I bought one of those I’d try my hand at the make your own cyclone.

you know the videos you see of the modified buckets cutting in holes - using vac nozzles to make your swirl. I suspect that works as well as this and is cheaper, in fact that’s probably the route I’m going to go.

Look up Thien Cyclone, they are simple to make and inexpensive.

I built one that fit in a five gallon bucket and it works well. I got a template for the baffle online somewhere, but I can’t remember where.

That webpage shows the cyclone upside down, the specs section lists a bunch of nonsense and the reviews are bogus. They have no idea what they are selling. There are other “brands” on that platform, all with the same issues. I couldn’t give my money to such an enterprise, but assuming you don’t have an issue, treat it like a glass doll and don’t expose it the sunlight. You might find they never meant for it to last.

I already own both an Oneida plastic and “pro” steel dust deputy cyclone. Honestly, I haven’t really been impressed with either. Oneida knows how to make a proper cyclone and their larger models have the helical top that should stop items from just spinning around at the top.

Also, does no one here watch AvE? It’s $20 out of my pocket to benefit the “community”. I want to know and I’m going to share the results.

Also, I picked up an 8" jointer and a 12" planer not too long ago, so a 5gal dust bucket just isn’t cutting it anymore. Both are vintage Powermatic machines and so they’re more powerful and run much nicer than modern “home shop” machines.

I actually saw that ToolBoxBuzz did a review of 12" portable planers and I laughed when they showed that those machines could only take off 1/32" per pass. Sadly, some clownshoe previous owner of the planer lost the knife adjusters and so I need to either make new ones or find a cutter head that someone replaced with one one of the “helicool” heads.

In my experience, they work great on sawdust. Much larger, like the curls you’d get off a jointer, is likely to clog the cyclone under heavy use. Much finer, like drywall dust, won’t get spun out very effectively and will end up in the downstream vac’s filter.

The port sizes don’t make sense; the inlet port will likely be the narrowest point in the line so if you inadvertently suck up larger stuff, it’ll clog right there. The outlet port is reasonable enough.

I’ve been looking at bigger, “proper” dust collectors and I’ve even seen a couple Oneidas come up for sale used locally. I’ll probably get one sooner or later but believe it or not, the little plastic DD has actually done reasonably well even when I had it temporarily connected to the planer. My shop is small so I want something with a 4" or 5" inlet but it has to be very compact. The final problem is that when I picked up the jointer, it was actually a “two fer” so I have a second #60 sitting in the middle of my shop that I need to finish repairing and sell. I just got the first one running really nice with new bearings, Amana high carbon knives and a rebuilt 1.5hp TEFC motor. Fixing the contactor was a nice educational journey.

No real surprise here but I have no idea where my cyclone is right now. Tracking was last updated about a week ago as having been processed through some type of sorting facility in China.

Some other, smaller items I ordered a few days after the cyclone may have rode on an airplane across the ocean recently so I’m hoping the cyclone isn’t too far off but it might also be sitting in a sea container that is slowly filling up.

To some extent, I don’t understand why stuff from China takes so long to get here. I did realize that some items seem to be shipped from the port of entry to the local USPS office via COSCO which I believe is one of the large world wide freight shipping companies.

I just checked and the tracking now says the cyclone is in NY.

Looks like I should have the cyclone in my hands on Monday.

The cyclone arrived today and honestly, it is really nicely made. It is at least as nice or better than the plastic Oneida Dust Deputy.

The inlet and outlet connections are larger than the Oneida at 50mm ID and 56mm OD so I’m going to have to do something to connect my shop vac hoses. It’s also a little bit shorter than the Oneida but otherwise they’re pretty similar in dimensions. The best idea I’ve had so far for an adapter is to cut down the straight pieces of pipe that came with my vac.

The hose clamps it came with are pretty short so I don’t think I’ll have a use for them.

The flange on the bottom is considerably smaller than the Oneida so I may have to find a new lid for this one if I want to be able to switch back and forth between the two to compare them.

The manual has a table of different cyclone models and specifications which suggests that this company also makes a 75mm inlet cyclone which I would love to get my hands on if this one performs.

Well, I made an adapter from 3/4" plywood and tapped some holes for 1/4-20 bolts to assemble it and it works. Seems to work about as well as the Dust Deputy except I didn’t see stuff spinning around the top endlessly.

This seems to be the 75mm inlet/outlet cyclone.

Tonight I measured carefully and cut one of my vac’s extension pipes at approximately the 3/4 point since it tapers from 2.5" down to 2" which allowed me to put one “half” on the inlet and one “half” on the outlet of the cyclone.

I’ve had this chinese cyclone for a while now and it definitely works better than the Oneida. The connections to it are an annoying size but on the other hand, what in shop-vacs and dust-extractors isn’t an annoying size these days?

I’ve been using my planer and jointer more lately and the little 5gal bucket fills up FAST. I really need to find something much larger for this purpose.

I’ve also found that the small amount of moisture that collects in my trash bin seems to turn my sawdust into some sort of paste so I may start bagging my sawdust before I toss it.

So, do you attribute better performance to having a rounded top? I wonder why Oneida wouldn’t make the best design. Perhaps they will now that they have this competition.

I think the top is part of the difference and the other is that the inlet and outlet are just a smidge larger.

The Oneida tends to get “clogged” easier which I think then leads to carryover between the inlet and the outlet where with the chinese one, stuff will go around in circles near the top but nowhere as bad as with the Oneida.

Given both the performance difference and the difference in cost, I don’t think I could recommend the Oneida over the chinese cyclone.

Another option is the “Dustopper” from Home Depot:

IIRC, the gist on Thein baffles was that they did separate a high percentage of material in the stream but not as much as a cyclone but they also have less pressure drop than a cyclone.

I’ve seriously thought about making a new top and bottom for my shop vac so I could use the 16gal “bucket” of the vac to collect the sawdust and make a new, more compact bottom for the actual vacuum unit. It would essentially be a home made Oneida Dust Cobra in the end but hopefully much less expensive.