Long time reader, first time user!
I recently read Stuart’s review of cordless OMTs. However I am looking to purchase a corded version. My tools rarely go outside my shop so the need to go cordless is pretty much mute. I’m going to be needing an OMT soon so I’m looking for recommendations. Here’s the kicker, I am on a social security budget. I don’t want a cheap boat anchor. I appreciate quality tools, just unable to spend a lot of money these days. So I am looking for a high quality low cost OMT. I know they don’t exist so I need help in getting as close as possible. So any recommendations?

Then there’s Dremel. They have a range of MultiMax tools, once considered one of the highest rated consumer-level OMT families on the market. They go from $80-$250 CAD, but mostly because of the accessory kits they come with.

I wish I had better details for you, but I don’t know where to search for your currency.

The cheapest corded OMTs I’ve commonly seen are the Dremel multi max, Rockwell sonicrafter, or a black and decker unit, all of which are around $60 US. They will come with a lacking blade selection at that price however, so factor in getting whatever blades you need as well if it isn’t a basic included one. You might be able to get a coupon to bring those prices down a bit. Between those, I’d go for the Dremel or sonicrafter.

A step up from there puts you up in the $100 class, which does open up a lot more and better options, but that’s also nearly 50% more expensive. If you aren’t using it quite a bit, that step up might not be worth it.

Here’s the sonicrafter, it’s a lower end of their line, I don’t have any personal experience with it to vouch for it though.

Here’s the Dremel MultiMax (it’s an older model), which I do have, but don’t use nearly as much anymore in favor of my Bosch corded unit. It was good, but just not quite on par with the much more expensive DeWalt and Bosch units I tried. It was pretty good as a basic OMT though, and I still pull it out if I’m doing something weird or particularly messy, let it take that abuse. 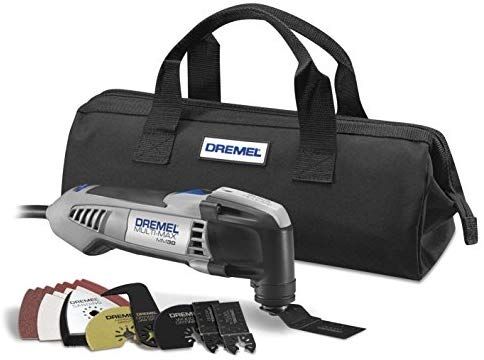 when I was looking at OMT’s I was purposely going the corded route at first also - similar reasons to yours. It would be around my own house, I have cords, I don’t plan to doing any major work with one etcetc.

As I got looking I was mostly pointed to the Dewalt or Porter Cable devices as they did what I wanted and had a quality reputation (reviews were always positive). Bigger - included in the box was a guide device which admittedly isn’t quite as handy as I thought it would be - but still good to have.

Otherwise my runner up was the corded bosch device - sort of getting a FEIN on sale which does happen.

BUT - using one (the rockwell multicrafter) on a project sort of opened my eyes to the flexibility of a battery run device. Since I was leaning dewalt anyway and I’m already in that battery system I only needed a bare tool widget. Timing and the like however I got a kit box - but that was more luck than sense.

But I would easily corded wise recommend either the rockwell or the dewalt or the PC. and since I have the dewalt I will say I do enjoy it - but mine is the cordless model. If you’re already in the battery system - consider the cordless a touch more. One benefit - it’s not just a detail sander - it’s now a cordless sander too. The dewalt I got came with attachments as a bonus - which includes a scrapper blade. I was dubious but replacing a toilet it easily peeled up the remaining caulk it seconds. IE the OMT is more handy than I first thought.

Thanks Tim, that is pretty much what I’ve narrowed my choices down to. I was just wondering if there is anything else out there. Also which one tilts the scale, or which one is more delicate. I do care for my tools but I also can push them pretty hard.

The Porter Cable is a fantastic OMT, I think I paid $50 for mine at Lowe’s. I’ve mostly stopped using it because I picked up the cordless DeWalt. Sure there are better but the price premium to get, say a Bosch, I’d easily grab the Porter Cable again or the new Craftsman (exactly same tool as Porter Cable).

I haven’t used this one, but I own the Fein equivalent, and it’s superb.
$179 is quite a bit more than some of the options others have suggested, but it does come with some blades and sandpaper.