I wonder if anyone can help me. I have a De Walt drill, DE9116. There is a fuse buried inside the charger, impossible to get at it, and if I have to buy another charger it’s 40 quid. It seems impossible to talk to anyone at De Walt;, they have a very odd message system which I filled in but no reply. I cant believe I am the only one who has had this problem, but what to do about it? Has anyone cracked it? 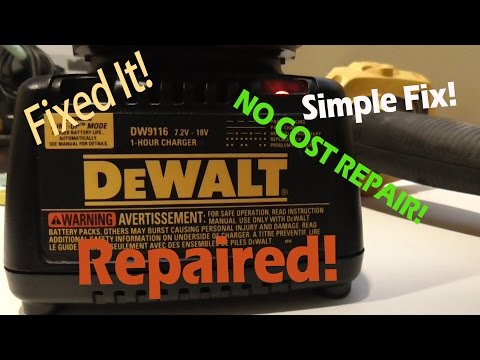 There was also a recall- here in the US on some chargers:

I also spotted these links:

So I have just broken my second dw9116 charger in 3 months. Now obselete ie unsupported so I am on my own with a jigsaw and drill lacking juice. Not mad keen to spend yet another £50 on an eBay special when I have had 2 identical failures. It Was...

Thank you so much for this info. It’s a stupid place to have a fuse - if it were on the outside it would be so simple. The guy who moved it outside had the right idea but i don’t have that part to copy him.

Now, I definitely have a dead fuse but I am not an electrician. Do you have a means to talk to anyone at this company. I use the thing rarely and I don’t think it is good enough. I am ready to ask them to fix it or send me another unit.