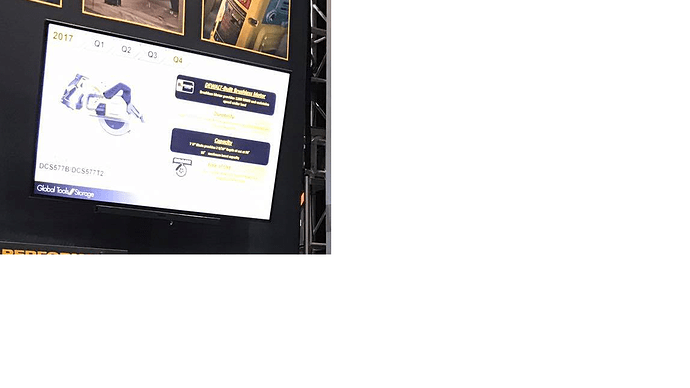 It better have a rafter hook.

Have a link? Can’t quite make out more than the shape in your pic.

Ahhh… the pic sucks lololol, but I can tell it does have a rafter hook, and I can’t quite tell but sorta looks like the battery might attach to the side…maybe… doesn’t look like it would fit under the grip.

Is that really a power-assisted wheelbarrow?

You all knew that this was the next step for cordless tools. The potential for flexvolt has not been realized yet which is why it is revolutionary technology.

Talked to a guy in a yellow shirt today, he said it has a rafter hook. He also said the wheel barrow could be a thing. If I was Dewalt I would make it a dual wheel set up. They are more stable to load with saw a small excavator.

The look on his has was priceless, then there was the how do you know about that question.

I didn’t see the pick but if I was doing a power assisted hauling device I would take one of those gorilla cart things - the dump model. Holds some 1200 lbs or so - good enough - and rig that for some power assist. Yes I know the handle can be flipped to tow with a lawn tractor etc.