Was wondering if anyone has tried one of the Dewalt portable folding benches HD is selling for $69? 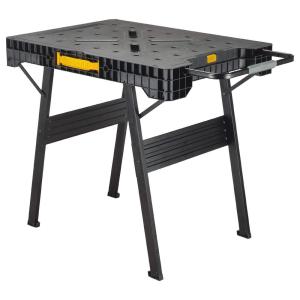 Do you think it’s better or worse than the Worx Pegasus as a quick pop-up work bench?

It’s fast and I found that they are steadier then I thought they would be.

I haven’t used the Worx table, but did recently buy the DeWalt at HD a couple weeks ago. Really glad I did. I bought the table along with the 4-pack of DeWalt clamps that were in the holiday specials shopping section, and I like the way the 12" clamps can be set nearly anywhere in the table thanks to the push-button end piece and ability to place in the many holes. (My other clamps don’t have that feature and don’t go into the holes, but they, along with the shorter DeWalts, can be used in the “X” slots in the center of the table). The table is simple and versatile, solid and strong, and it is easy to set up, take down, and move around.

Thanks for the replies guys I do like the simplicity of the Dewalt table even though it doesn’t come with any clamps and there’s no onboard storage.