So, I had the day off and decided to stain a concrete floor for a friend. As I was tearing out the old carpet I ran into the issue of the anchor nails for the tack strips. I could yank them with my pry bar and leave a decent sized hole or chip the concrete, or I could try to cut them as flush as possible. I went for the second option and went out and picked up a PC OMT, maybe I really was missing out by not having one. So I load up the wood and metal blade that came with it thinking it could handle the rather small nails, well after two the blade is just flat and I’m just melting the nails with friction. I was perfectly fine with saying I just used the wrong blade and grabbed a dewalt titanium metal cutting blade for twenty bucks. This one made it through about four before I’m looking at a mostly edgeless blade and am back to just melting them. Am I just asking too much or is there a drastic difference in blade quality for these things?

I’m guessing that the tack strip was attached to the concrete using a PAT. The hardened drive pins fired into the concrete with a 22 or 25 caliber charge - by necessity have to be really hard. I’ve never tried to cut them in the application you have.
I have cut (actually ground them away) when standing proud after being fired into a wide flange.

I’m not sure if one of the OMT blades with carbide grit or even diamond grit edge - will have any real longevity in cutting drive pins - but it may be worth a try if you absolutely don’t want to pry them out.

When a demo OMT blade comes out I’ll own some but until then I’d use a grinder for that application. But to answer your main question, no, OMT’s are awesome tools and the blades are getting better and better BUT still I haven’t found a blade to last more than a few nails or screws. Now a little general advice for using an OMT, always let the blade do the cutting, never force it, I’ve learned that the expensive way. With care you will be able to get very good cuts and extended blade life.

Thanks for the info guys, I really was happy with how flush I was able to cut/mutilate the nails and got some good use out of the sander attachment. I’m just trying to get a feel for exactly what these tools are capable of.

I did wind up pulling a lot of the more discreetly placed nails just because it was so much easier, a grinder crossed my mind but I wanted to try to avoid scraping up the floor too much.

Try the Bosch carbide tipped blades. They are pricey, but if you look at Stuart’s review/test, they did really well imho.

That makes me wonder, is there some kind of chart for which blades fit which brands? Obviously PC and Dewalt match up but what about the starlock or Dremel?

Ironically I went in to buy stain at our local contractor supply store and they had the fein for like 25% off, oh well.

You’ll notice on your PC the blade stud is threaded for attaching non DeWalt blades, some off brand blade kits come with the screw and adapter.

There are also adapters that let some blades with different hole patterns fit on different make oscillating tools:

Usually it’s easier to just drive the nails home, rather than remove them. Or you could smack them back and forth until they snap. These methods are the best way to deal with any hardened fastener. They are brittle, thereby easy to snap, but exceedingly difficult to cut. If you must cut, I agree with the fella who mentioned a grinder. I often use a cutoff disc on my rotary tool to cut fasteners. In fact, it’s about all I use that thing for.

If you have the time, read some of these testing posts:

I would also be willing to try Dewalt’s new carbide blades, but they’re pricey: 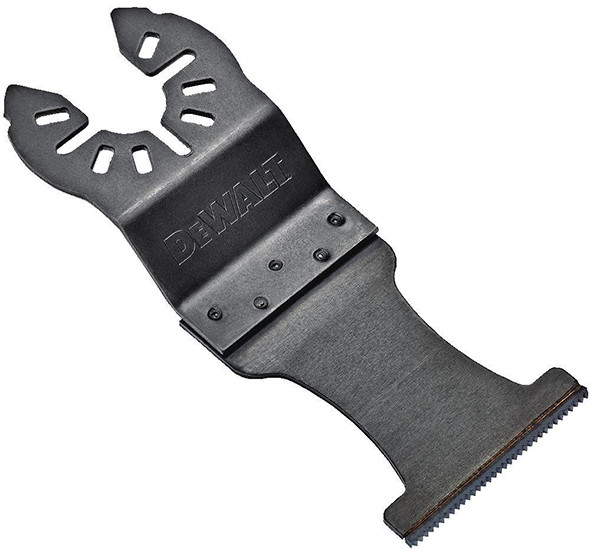 Dewalt has come out with a new carbide-toothed oscillating multi-tool blade, and it should last a lot longer than bi-metal blades.

Thanks for pointing me in the right direction, I’m not sure how I missed that… I’m pretty compulsive about reading every article no matter what it is. I’ll seriously look into these but it might be some time before I really need them again.

Yes I remember that story. Sadly I can’t justify the cost and as such cannot comment on the performance.