After spending much of the past year investing in DeWalt 20v Max and resisting various Milwaukee deals, I finally ended up pulling the trigger on a Milwaukee Fuel buy. I have little need for a rotary hammer, but have wanted one since using a Hilti to drill stake holes into asphalt a few years ago. A few months ago I passed on a corded DeWalt that was on clearance for around $100, but yesterday my local Home Depot had a deal I couldn’t refuse. For right around $170 I picked up a 5Ah battery starter kit and the 2713-20 Fuel rotary hammer, along with the new DS 130 Tough System box.

Now I’ll likely be buying Milwaukee M18 tools as deals pop up…needless to say I can’t wait for the post-holiday clearance pricing. Even so, I don’t foresee replacing the DeWalt tools with Milwaukee, only supplementing them. I know there are lots of fans of red and fans of yellow (not to mention other tool brands)…which cordless system(s) do you prefer? What kind of tools do you feel certain manufacturers make better than others? I’ve had very positive experiences with my 20v Max tools so far, but look forward to trying out the M18 line. 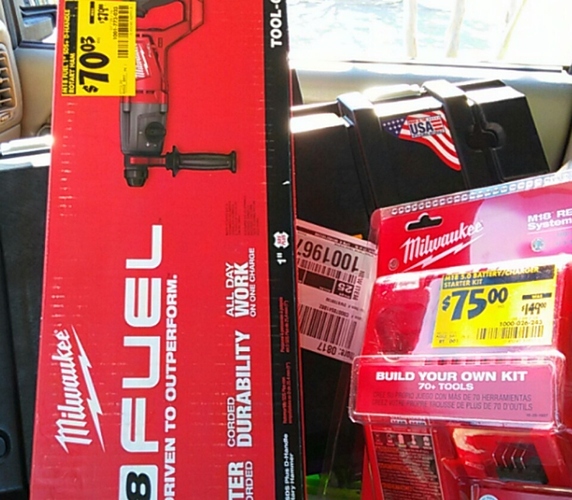 Great buy!!! I’m a Yellow tools owner and I’d have a hard time passing on that deal!!! Over all the yellow ones meet all my needs and haven’t come across a situation where I needed a different colored tool to do the job or do the job better to justify the cost of a different battery eco system. But that deal could sway me!!

That’s how I felt…I have a lot of DeWalt’s offerings but couldn’t pass this deal up! Of course, it opens the can of worms that now I’ll be on the lookout for a spare battery or three, and maybe some other M18 (and perhaps M12–the charger works for both) deals. Besides, I could always sell these and put the money towards the DeWalt rotary hammer. Or not, Milwaukee does make decent tools and it will be nice to compare them to DeWalt.

Thanks for the info! I have to take a brief hiatus from major buys for now, though. That, and I really need to get to one of my houses to actually USE all these tools.

I was just looking back at this and I noticed how much you paid for the Rotary Hammer. I would have bought it without a thought. That’s even better than the $100 I paid for a $200 Fuel impact wrench on clearance! Not bad on the rest of the deals either. When Home Depot wants to get rid of something they can really aggressively drop the price.

I hit the clearance section of 4 sometimes 5 different Home Depots whenever I’m in the neighborhood, I’m usually in there looking for something anyway. Maybe every 10th time I find a bargain that I can’t refuse. I’ve been noticing that some of the Home Depots now have the clearance or returned power tools right in the middle of the tools section sometimes on an end cap or hiding among other tools. Sometimes they are in the “clearance section too” It’s almost like they are trying to make you work for the deals.

Once you get into a battery platform, it’s amazing what deals you find, even when you are already looking.

Home Depot’s clearance pricing is what finally inspired me to upgrade to DeWalt. Since last year I’ve picked up the following (prices include additional military discount):

Lowe’s had a few good deals as well, and I bought both the string trimmer and the larger blower for $144 each. I found a bunch of Milwaukee deals (none as good or as convenient as these, though) but always passed as I’ve invested so much in DeWalt. Until I retire tool buying is a hobby of mine (they’ll get plenty of use after my military career is over), so why not buy good tools for cheap? It beats spending money at bars or on creature comforts…