I got an email from Acme Tools the other day with a coupon. There, front and center, was what appeared to be a DeWalt Flexvolt cordless microwave! The email made no mention of it though. 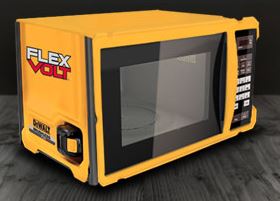 Could this be a new Flexvolt offering coming down the pipe? Has anyone heard of this yet?

I too got the email.
The message seemed to indicate that Acme was offering some specials for Halloween in the way of “tricks and treats”
The trick was the Flexvolt microwave. I took that to mean that the next time we see it will be on 4/1/18 as an April Fools joke.

So…Did anybody get an email from AAACME Tools today?

Does the legend of the DeWalt Flexvolt cordless microwave live on?