Anyone have recommendations for a good cordless glass engraving? Too many similar 3-star vs contradictory reviews products in this tool category. Thanks in advance!

Pretty much any Cordless Dremel Rotary Tool, using diamond point bits. The key is to also use a drop of Olive Oil on the spot you’re engraving, to keep the bit cool. Also, if you’re engraving an actual glass, like a tumbler, wine glass, or drinking glass, fill the bowl area with newspaper to increase the strength of the glass area you’re engraving, without risking the glass shattering while you have pressure on it with the tool. And always remember the key to Dremel Rotary Tools is that they are high SPEED tools, not high TORQUE tools. A gentle touch, and patience, is all you need to get the results you want. And it always helps to have a spare of whatever you’re working on, to test what each bit gives you while working, before trying it on the main piece.

Thanks for the reply, that is great info! My use is the bottom of canning jars for food. Should I fill them with water for stability? Or should I leave them empty?

Mason Jars? They’re so thick you don’t need anything inside. You really only need to stabilize drinking wear, with thin, or untempered glass.

Just remember, light touch will be all you need. Go over the same spot, or move very slowly, if the line is not thick enough for you. Or, if it’s at all possible, find a diamond point with a larger diameter than the one you have. They are usually sold in sets. Be careful to set the Dremel to the speed indicated on the packaging. Some tools go faster than others, and sometimes the max speed is too fast for the diamond point, you’ll end up destroying the end. Similarly, the bits you buy will have both a maximum speed and a minimum speed. Make sure the ones you want to use, and the Dremel you own, are able to do both.

But, as long as you keep the labels for the diamond bits to remind you what speeds they need, buying a matching Rotary Tool is easy. There are many on the market, but Dremel is the best. And, yes, in this day of star ratings, you’re going to get conflicting messages about them. BECAUSE of Dremel’s reputation, some people get over-zealous with these tools, and push on them in a way that makes them burn out faster. They’re Speed tools, not Torque tools, and so putting a lot of pressure on them burns the motors. When this happens, people get angry at Dremel for making “Junk Tools” and give them bad ratings. But, I’m 36 right now, and have been using Dremel since I was 9. Even before I owned my own tools, my Mother’s old 395, from before I was born, still needed to be “Babied” a little bit. You couldn’t force it to do anything. You had to be very gentle with it, and it still survives to this day! It’s in the other room right now, still going strong. Unused since I got my own tools, but still. It works just as well now as it did when it was bought.

I think the only complication you’ve put yourself with, is this “Cordless” issue. There is a corded Engraver by Dremel, and it’s about as complicated as a Tattoo Pen. You can remove and replace its stylus point for either Carbide, or Diamond tips. You just set the depth you want, turn it on, and it’s like writing with a pen. And considering you are working with Glass, you probably shouldn’t be working INSIDE your Pantry, or near where you prepare food. In all cases with Glass engraving, there’s glass dust that is ejected into the air. You have to move to an area that is safe for everyone anyways, so you might as well find where YOUR safe place is, and see if Corded might be back on the table. The Dremel Engraver tends to sell for around $40, give or take a sale. The Diamond Stylus for that engraver is $9 from Dremel, but retails (if you can find it) for about $11. The 3000 and 8100 hover around $70, plus a decent set of Diamond Bits is around $30. Once you hit the 4000, 8220, or the newest one, the 4300, you’re hitting $100 pretty easy. Though the 8220 goes on sale for around $80 pretty regularly.

Purely for your own sanity, stop for a minute and have a look at where you’re working on this. Look at your budget, and choose what’s right for the job you’re doing. Most pro engraving goes for hours, and they’re doing tons of intricate designs. If you’re just putting a date on a Mason Jar, then you don’t need the Rotary Tools at all. The Dremel Engraver tool, Model 290, is all you need. If you do TONS more stuff than just engraving dates on Mason Jars? THEN consider the Rotary Tools of your dreams. They do lots more than Engraving.

Have you considered etching cream? A friend was having a wine party and wanted some wine glasses decorated. Just paint it on using stencils or freehand, let it sit for 5 minutes and rinse it off. It can be found at craft stores like Hobby Lobby. The lady was really impressed with the glasses. Impressed enough to get a free bottle of my wife’s favorite.
I’ve tried engraving and found etching so much easier.

That sounds like a winner, I’ll look into this. All I want are my initials on the bottles. Thanks, I didn’t know such a method was possible.

Yikes, the only thing I know that will etch glass is hydroflouric. Didn’t know you could buy it for non-industrial use! Good to know, thanks!

I had to look the stuff up. It’s called "Armor Etch. " Wish I had taken pics of the glasses to show ya. I used a rub-on stencil of grapes and vines, carefully painted the etching cream on, waited and rinsed it off. I used alcohol based ink to color it because it gives it color but transparent. Also very easy correct with a little rubbing alcohol.
If you have a Hobby Lobby near by, pull up the 40% off coupon and print it or keep your phone handy and they’ll scan the coupon on your phone

I have a big Vase that I use as aquarium, I bought it to reduce the silicon from the aquarium to make it more healthier for my fish, but still I have to use a tiny plastic pipe for the air pump, is there anyway to drill a tiny long clear hole vertically in the wall of the aquarium (vase) to use it as air pump pipe?!

I know of no good way to drill long holes in glass - but you might substitute a piece of glass tubing (from a laboratory supply house) for most of what is now plastic tubing from the air pump. You will still likely have to use some flexible tubing to make connections.

I know the glass tubing, the problem with it is that the more I put something inside the water in aquarium the more algae will grow around it also, it makes more cleaning job for me, I want to reduce the cleaning process as well. Every time I do a deep cleaning on that aquarium it stays clean for 7-10 days max and then it start to look ugly with algae everywhere, specially around the air pump tube.

We had a big saltwater tank in one of our showrooms - but had a service company maintain it.
I haven’t personally kept fish since I was a teenager in the 1950’s - maybe into the early 60’s - so things have changed a lot. But algae growth is promoted by light - so maybe your aquarium is getting too much?
Also - have you tried adding some algae eating fish? Back in my time - for freshwater tanks - the plecostomus was a popular addition. They help - but obviously can’t keep the tank pristine. 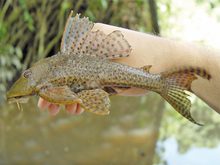 looool
I know that ugly fish, in my country a lot of guys were keeping that fish for that purpose, but I prefer to have algae rather than having this fish in my aquarium

plus my Vase is 30 Lt capacity as I could not find larger capacity Vase anywhere in London and online. I did purchase mine from a German seller on eBay. I wish I had the back wall and side walls in white glass and just the front wall in clear glass, it would be easier to see the fish. I don’t know if there are some who can make something like this.

Your vase is probably a lot prettier - but a large glass carboy with its top cut off - might give you almost 6 gallons - but it would still look like a bottle. I guess you could do a web search looking for unusual aquarium designs as alternatives.

I had another thought about going big. We installed a glass bathtub for a client some years ago. It was a bit hard to source (you won’t find one at the local Home Depot) - and we did not question the client’s motivation for wanting one. It did look nice sitting on a black polished granite floor. I never heard if it proved to be practical. It would certainly make one humdinger of an aquarium.

My vase is 30 Lt, 6 gallons is going to be less than 24 Lt, also round shape aquarium is not good for fish psychology, it is believed fish need to know the ends and corners in place they live, in round shape aquarium they feel like they live in an endless place with no corner and keep turning in to discover it and they go mad. I did a lot of research but I could not find anything like that. For a while I was fan of Granite solid bath also, but I noticed in case if some hits his/her head to it, that would be a disaster. Plastic or fiberglass bath are better than metal ones even, but even metal ones have a bit of flexibility and if some hits the head to it would not cause a huge injury compared to a glass or granite one.