I was just wondering if anyone owns this and what they think of it. Feel free to use the coupon if you like. I’m just curious. $335 is low priced. 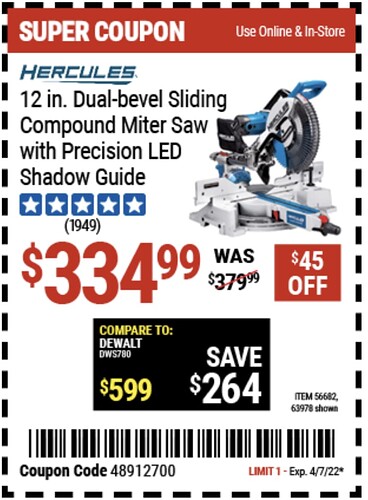 I have one - very happy with it. Weekend use mostly, but never any complaints. Even the blade they include is pretty good.

I suspect it’s as much a dewalt clone as possible with all the non- to spec parts tossed out of the dewalt factory in china. I think this is true of all HF tools - they are made from the spec part rejects from the __________ factory model in China. Be it Dewalt, Milwaukee, or whomever else they try to clone. I might be wrong but golly there is alot of similarity.

Meanwhile I’ve considered one a few times but I think I want to buy the Ridgid model - if you get one first thing I would do is read up on truing and testing the say for squareness and spend the hours to setup it up once. which I would also say about any other mitre saw too. SO go to the store and make sure the fence is adjustable and there are good ways to “true” the saw up. Not all mitresaws are fully adjustable or so I’m told.

Good Luck and post back which what you end up with.