Hello gents,
made double clanger:
1-Bought absolutely wrong saw
2-Second hand…
Works only so so… neither accuracy is satisfactory, neither the supplied battery lasts more than few cuts…
looked everywhere for battery- turns out whole 28v and 36V range has been killed off.
Found Second Hand battery and charger in US- doesn’t ship to UK, still looking and thinking would, if I would get such, to make plug in option using charger as an extension lead (US 120v works perfect on UK 110V site standard power tools), just a question that charger (28-36v) rated 3A 123VA- to use with bottom shell of a battery as an adapter…
would it work gents?
also, found supplier of 36V battery (at a great expense), would that be killing the motor on a saw?
Thanks for ideas in advance!

It would all be cheaper if you just tried to buy the FlexVOLT tracksaw. That entire 28 volt line is dead as a doornail, same with the old 36 volt. They don’t even use the same pin out. As much as you think you got a deal buying second hand, for dead lines like those, you’ve probably spent more trying to find working systems than just buying the FlexVOLT. It’s a full-on 60 volt platform (so, it’d be a 54, compared to the 36 and 28.) so it has plenty of steam to handle what you’re doing.

You do make sense, unfortunately.
Still, thinking of some/any way to salvage something out of it or to make it usable for a little while …

Well, I understand the frustration, but I’ve seen this exact issue before. It always resulted in the purchase of a totally different track saw. Yes, if you have some electronics experience, you could in theory build a transformer circuit to convert your local AC into 28 V DC, and splice the output to the positive and negative leads inside the battery compartment, then remove the batteries and have a full blown AC version of the saw. But, at the same time, you’re risking fire if you do this. That’s not slang for trouble in this case, I mean FIRE. Since the AC/DC converter would produce more heat than the battery ever did. Put that near wood, and you’ve got a fire hazard.

I REALLY want to say this would work, and that your major score in a second hand saw was worth it… but the reality is, that tool is usually so expensive that nobody lets one go without a good reason. You got snookered in the deal here. You bought something from someone who KNEW it wasn’t going to work, ever. Compare all the money you’ve spent on it, with the cost of buying the UK edition of the FlexVOLT Track Saw. You’ll see for yourself.

Yes, it appears so…

On the other hand A123 cells are cheap (relatively) to replace
http://www.candlepowerforums.com/vb/showthread.php?185348-Dewalt-A123-cells-28v-and-36v-packs
Would make sense to get US charger and dead battery to revive the whole thing

Really set myself on solving obsolete battery situation.
Few times worked with it (each time until battery dies) so far,beginning to like it

(I presume, since fitting is physically identical(?) )
Q1 : 36V and 28V tools/batteries compatible/interchangeable? both use DE9000 charger… (found battery and charger in 36v, that ships to UK)

Q2 : anybody would have knowledge of the saw DC351 actual power draw figures? still thinking in pros and cons in using battery shell, with battery charger as power source connected to the saw from the mains via battery shell)

Q3 : found (28v Li-Ion) tool with batteries and US voltage charger cheaper option, than trying to “revive” DeWalt 28V system. could I use different technology batteries (and charger), if to fit in to the shells of old non working DeWalt batteries, where capacity is almost identical . DE9280 is 28v 2.2Ah 62Wh “Nano”, vs, 28V 2.4Ah 68Wh in way smaller size factor (clearly physically would fit in a shell)

You may be REALLY into reviving this saw, but you have picked one of the greatest failures DeWALT has ever put out in order to do so. You are COMPLETELY setting yourself up to fail, or kill yourself trying.

I’m sorry. I really am. But, put honestly… You could do what you are asking better with pretty much any OTHER Saw out there. The DeWALT NiCD 28 and 36 volt lines were a total failure, and cannot be saved. They were junk when released, and are junk now. And I say this as someone who is completely invested in DeWALT tools. I’m not trying to sell you something, or insult you, or anything like that. But,I’ve seen many comments on the Facebook page, asking to do exactly that. Every. Single. One. Failed. The Saw overheated, or there was intermittent power, or the power transformer was just not up to the conversion, and melted either itself, or the housing, or both.

You, sir, are tilting at windmills, I’m afraid.

thank you!
PS those are Li-Ion batts

My apologies, it was late when I typed that, and I was tired. Yes, they were Lithium Ion… EARLY Lithium Ion. They got them to work better later on, such as the MAX/XR and FlexVOLT family, but these 28/36V tools were deeply flawed.

Like I said, had you ventured into this on almost any other saw, you’d probably be done by now. But you hit a VERY bad saw for these things. It’s the Saw, not you. All the searching you’re doing for batteries and chargers from around the world… Honestly, just buy a FlexVOLT from the UK. Save your money, sales should be coming up like crazy soon.

I’ll make some photos in a week or so, if Google isn’t helping.
2- Sorry, but since buying additional battery and blades etc - personally wouldn’t be selling it, as I’m a professional (horderer) and I highly doubt, you’ll find one to buy… Or you’ll find it, but batteries are going to be dead or extremely expensive £130-$160 each

Have same saw with two batteries but only one working. Probably going to upgrade soon if anyone wants to purchase mine

If, it’s of any need, but have experienced many other/better saws… If on a budget- Makita, else MT55 or if you only ripping sheets go for FesT
(My $0.02ct on makes and designs)

If you just have to do it you could rebuild that battery pack. and the charger might could be fixed - without looking at it I suspect it’s a simple thing.

YOu could look into the world of hobby battery systems and see similarities. you already know the operating voltage. People get caught up on the current aspect. There is nothing wrong with a battery having more current depth and output capacity than the demand. The issue is when you short the demand and it pulls more current than the batteries are meant to expel. Thats when fires start.

Anyway it is feasible have you taken the battery apart yet? Do you find that it has cells inside welded to tabs - soldered together in series?

Happy new year!
Thanks!
Nope, never got to open the batteries, but I remember reading, it was “intelligent” to do opposite- get A123 cells out of DeW batteries for RC or else usage and at the time, they were expensive alone.
Cheers!

I also bought one of these 28V Dewalt track saws. Bare tool, on clearance, online.
I live near a Dewalt service center and was able to grab all the accessories from their overstock bins very cheap. Also spotted a 28V battery pack in the recycle basket by the door & asked if I could take it home.
All this enabled me to build a complete setup for less than 1/2 the usual cost so my remorse has been lessened for that reason.

I’m in the same boat re the batteries. I bought a battery pack off eBay and the one from the recycle bin only had 2 bad cells so I combined to make a good pack + some spares. Problem is for me a trak saw is a specialty tool that doesn’t get much use. Infrequent use is a bad thing for rechargeable batteries and my cobbled pack now faults out on the charger. Today I brought the pack to work where I have plenty of electronics to play with and I’m “exercising” this battery to try to revive it.

I’ve often considered converting the tool to use a plug-in DC converter & long cord to power it but this saw is a current hog & the power converter would be large. I’m considering taking the base off a pack & wiring an “umbilical” to an external 24 or 28V pack or possibly seeing if I can fit ~28V worth of Li-Polymer batteries in the shell. They are smaller but still put out a great deal of power. Re-charging a special-voltage pack might be an issue if 28V is uncommon for Li-Po packs because of the battery balancing circuit normally contained in these packs.
For safety & longer life you can’t just solder a bunch of cells in series like you could with Ni-Cd batteries. Changing battery chemistry also means you couldn’t use the OEM charger.

Even so I don’t think these issues are as insurmountable as “Dorian42” believes them to be. These tool “systems” are a big investment and we are motivated to get our money’s worth out of them.

These are just the opinions of a tinkerer & I joined up just to share them.
Don’t give up!

Lost contact with an electrician, who had all figures worked out for me as in
Real voltage
Real discharge amperage
Charge (charger) real current range (voltage amperage)
Who said, that at the time a123 circuit wasn’t compatible with other makes 28v Li-Ion batteries, but those , once you have genuine DeW case are plenty…
Anybody could advise me (us) on those again please? 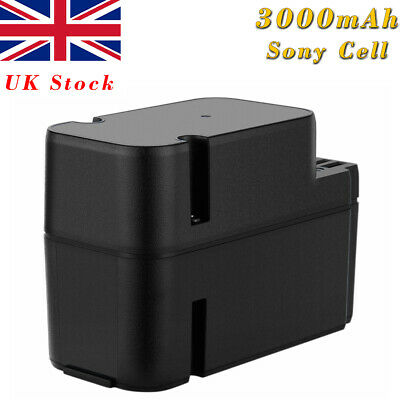 Have you opened the case on the dead battery you have and figured out what cells it used? Doesn’t solve the charger problem, but replacing cell for cell and rebuilding a pack is pretty straightforward if you can solder and have some basic electrical skills. 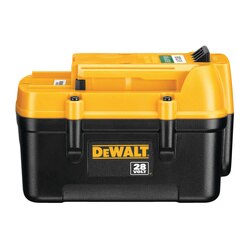 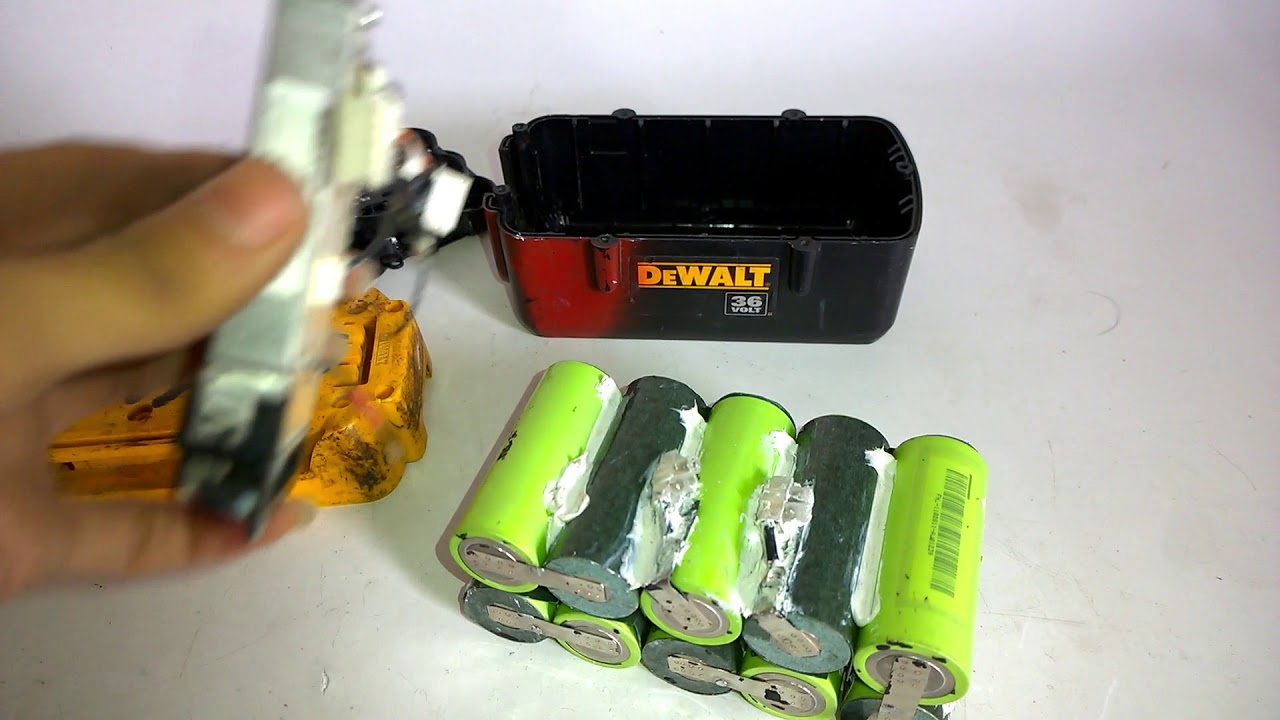 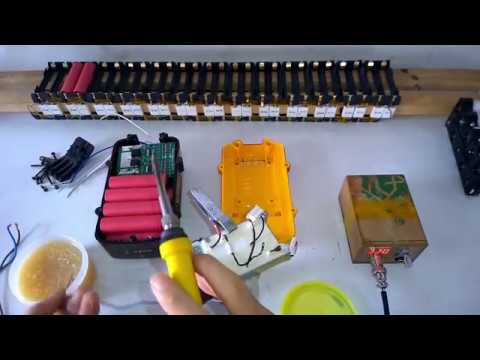