Back in January – over at the ToolGuyd site – Benjamin posted about the Camo-Profit hidden deck fastener system – made by National Nail Corp. 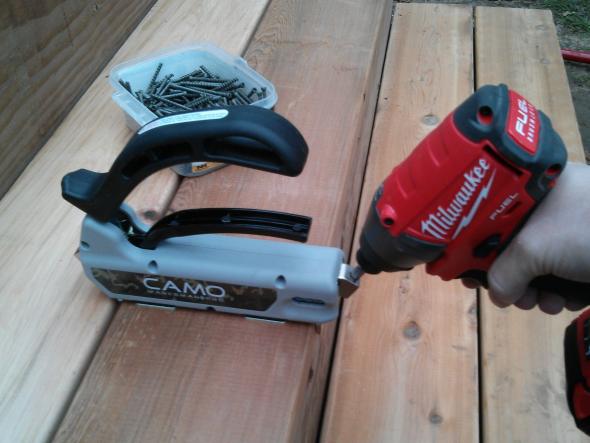 The Camo Hidden Fastener system provides an easy way to fasten deck boards without unsightly screw heads. Here’s Ben’s experience with the system after using it to build a small deck.

We had been using these on and off since 2011 – but had some callbacks for screw failure so we became a bit cautious.

We had looked at other systems like Tiger Claw – but they work on grooved decking: We also saw the EB-Ty system, Timber Tech and others: 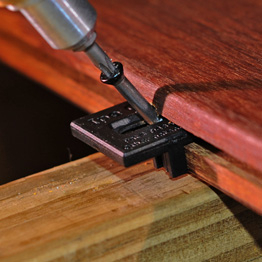 and liked the look of the Senco Mantis product and tooling – but my ex compatriots have not invested in this yet:

I’m about to re-do a ground level 32 x 32 cedar deck that was originally built with SS trim screws – installed on the face. I am looking for advice. I have access to the Camo tools – but is there something better out there?

I use Menard’s brand Grip Fast deck screws almost exclusively. They have a drill point and about an inch of unthreaded draw. Past 2 years of using them on about 9 decks of various styles I’ve not had a single service call or unhappy client. I’ve broke some, sure but not nearly as many as other brands. I personally don’t like Senco screws or driver for anything other than drywall. Just my 2 cents.

This spring I noticed a few places where the Camo screws lost their grip and the edge of the board pulled up. Every instance of this is on the end of the board though. I think that the grain must have split and released the fastener. I have to pick up a packet of screws (I only have 2 left) and drive the new screws as far along the edge of the board while still being able to hit the joist.

I was planning on making some outdoor chairs using the Camo screws, but now I’m not so sure.

To add I haven’t used Camo screws personally and don’t plan to, they just are glorified trim screws to me.