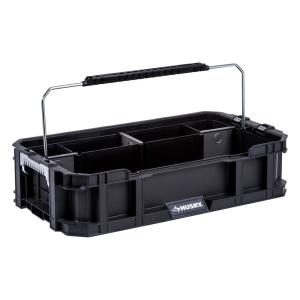 Anybody seen these in the wild? HD has had them listed on their site for what seems like months now, but they still aren’t available for sale as far as I can tell.

I have been using the Connect system at work, and while I need at least one more of each of the upper boxes in the Rolling stack, this caddy would also be incredibly useful (as the cantilever boxes don’t allow additional stacking, you have to combine stuff under them; inconvenient, but they are still useful to me.

I have a Rigid stack at home and love them, though I’m craving more options there too. As a network engineer who splits his time between the desk and a lot of different field locations, I’m hoping Husky continues to evolve; I can’t justify the Milwaukee Packout gear as awesome as it may be, to get close to the equivalent of just what I have currently would have been 2-3 times the price.

Apparently ask and you shall receive. These just popped up in my most recent check:

And the Caddies are now also available in several local stores (I haven’t actually seen them yet, just basing that on the website. Might order some later today and pick them up tonight/tomorrow.

I bought into this the other day, got the rolling stack and the 5 compartment tool caddy — still sorting tools and trying to get things organized by task, but it seems promising.

Wish there was more internal organization and am debating on making something to help sort that out.

I’ve not really been satisfied with these — the stacking and unstacking drives me nuts.

I’m currently trying to modify the 5-Compartment Connect System Tool Caddy to serve as a drawer housing — if that works out, I’ll do a second if need be, and hopefully avoid buying something new and complete.