KitchenAid sells a 12-volt cordless immersion blender for a heart-stopping $420. 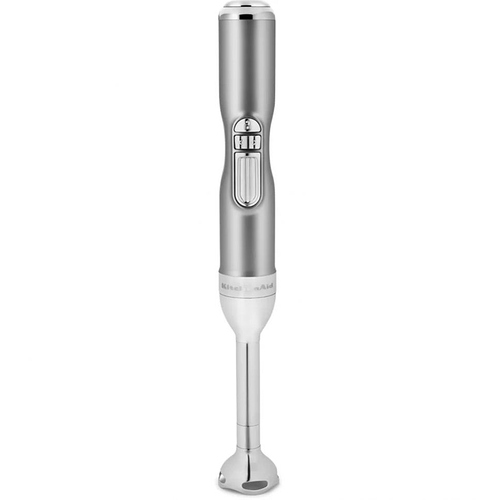 5 Of The Best Immersion Blenders For Healthy Cooking

From salad dressings to hearty soups, immersion blenders are the kitchen appliance for a cleaner, healthier, more vibrant you.

I’m wondering if I could just get the wand as a replacement part, and chuck it into my M12 drill/driver. The RPM’s might be too low though. And maybe I’d need to keep the blade shroud/shaft cover from spinning?

This is what makes the Kitchen Aid so pricey ($400 via Wayfair):

There are a bunch of online discussions about cordless drill immersion blender attachments, and the main concerns are contamination. There’s the potential for cooking fluids to splash into the tool, or contaminants from the tool to fall into the liquid.

There are ways around it, and I believe I’ve seen drills used in cooking competitions to mix up big batters.

Unless you absolutely need it to be cordless, you’d be better off with an AC immersion blender. And if it must be cordless, there are other brands that are sold with fewer accouterments.

I could see those attachments adding maybe $50 to the price. So, $150, more than an M12 drill/driver kit with two batteries, and probably far less heavily built. But $400?

Thanks for mentioning the other discussions. But splashing liquids into the tool? The wand could have a splash collar.

Contaminants from the tool? I’ve never noticed anything falling from my drill to the workpiece, ever, not in decades. Anyway, it would just be grease, if anything. I’d take my chances.

Yes, I know corded would likely be better. In my case, my kitchen is so small the cord tends to droop into the sink and whatever dirty dishes and pots are there. Not really a safety issue, but it adds a step to the cleanup.

What I mean is that a lot is added to the Kitchen Aid package to justify (or possibly drive up) the price tag.

I’m not saying the cordless immersion blender is worth the such price, just trying to understand it.

Proportionally, it might not be substantially better than other brands’ offerings, which could open up opportunities to piece together a more compatible accessory pairing if you do use a cordless drill as the motor source.

When drilling into drywall, wood, or other materials, tools get dusty and dirty. The risk or concern is that these things could fall into whatever foods are being mixed.

I haven’t come across many adaptations in quick searches, but am intrigued as to what you have in mind.

Looking at restaurant supply shops, there are plenty of replacement parts available for ideas.

I wonder if an inner shaft can be used by itself, or if it needs the outer guard with bearings for stability. You can buy the inner shafts, but the question is whether it’s safe or effective to chuck into a drill. How would the inner shaft be attached? The bottom bell of an outer sleeve would help with splashing and possibly uniform distribution as well - I’m guessing, I haven’t looked into the mechanics yet.

My impression is that the bell on the outer sleeve somehow helps control fluid movement around the blades, and also improves safety as an added benefit. Or vice versa. Third, when I use my immersion blender, I notice that the blades tend to pull the entire tool downward. The bell might keep the blades from contacting the bottom of the pot, and dulling or bending them. Fourth, the bell might help prevent spattering. That might be why the bell can’t spin along with the blades.

But the blades have to spin fast enough. A quick check of a few immersion blenders talk about watts (consumed, not applied, I’m sure.) They don’t mention RPM’s. Oh well.

It wasn’t a serious idea. I’m just gobsmacked at the idea of spending $400 for a 12V immersion blender when an M12 or equivalent drill is far better built, probably has longer battery life, and costs 1/3 the price. And I believe immersion blenders are not meant to be run continuously, just in pulses of up to 1 minute. That speaks to poor cooling, or just crappy design.

yes those bell shapes do a few things. One it has feet that keep the blades from touching bottom of your nice pots. It helps shape the flow of fluid and materials into the blade path. Think like the bottom of your lawm mower is shaped to help mulching grass.

I see no reason for cordless appliances in the kitchen other than perhaps a carving knife. Why - I have outlets nearly everywhere. If you’re getting an immersion blender I highly recommend the Brevel device with the chopper attachment it’s a mini-food processor. But it’s also speed controlled and acts a bit like a power tool with Electronic load controls so it maintains speed setting under load.

The chopper is sweet.

As I said earlier, my kitchen has just two outlets, and the only free one is next to the sink, so the cord falls into the sink, among the dirty dishes. I would consider a cordless immersion mixer, though I’d consider $100 a fair price.

We use our island outlet and immersion blender about once a blue moon; but they are both handy for specialty items…like homemade avocado mayonnaise !! I think our corded blender was $20 at BedBath&Beyond

I use mine fairly often, because I don’t have space for a regular blender, and because I can make smooth soups right in the pot I’d used to cook the vegetables or whatever.

I was just more outraged by the idea of a $400 cordless blender with a dinky 12V motor and a handful of accessories. $600 for a Vitamix actually makes more sense to me: big motor, heavy bearings, long-lasting seals.

Same situation here. I love the way immersion blenders worked. I had a nice compact one with 4-5 blades, but somehow lost the entire set of blades, and the maker went out of business. I looked for a new one, and found myself in the same conundrum as you.

Since I use it 1-2 times per month on average, it had to be cheap. I settled on a big bulky powerful AC unit on which the blade cannot be changed. I didn’t like that non-feature, but it has worked great on everything for 3-4 years. The brand is “Kalorik”, and it’s mostly stainless steel. I don’t remember the price, but I wouldn’t have paid a lot for such an occasional tool. Good luck!

Looks like this is a pro model. It probably does have better bearings and seals than other models that would make it appropriate for daily use in a commercial kitchen.

There are a bunch of other cordless immersion blenders that are around $50-$100.

For people like us, this is similar to wondering why someone would pay $3,000 for a SawStop (or similar super high end) cabinet saw when you can pick up a Grizzly for $1500 or so. For most of us, the price doesn’t make a difference, but if you’re actually a professional woodworker, maybe it’s worth it to invest in something that’s a bit more durable or precise or whatever. To each their own.