Who makes adjustable wrenches with the least ‘slop’?

I’ve tried Bahco wrenches. While they were well made, I found they still had too much slop. Is Bahco quality what it used to be?

Stuart’s praised Irega, which makes wrenches for Channellock, but I’ve never held one in the metal.

Also, I read on Toolguyd that Milwaukee’s adjustable wrenches have an extra-fine thumbwheel that’s designed to reduce slop: 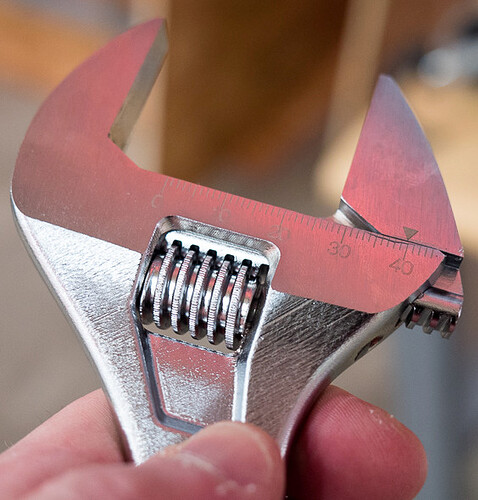 What do you think?

We’ve all probably have had a love-hate relationship with the ubiquitous adjustable wrench.
As a young whipper-snapper I was taught that using a single size wrench that fit the nut was always preferred to using an adjustable. That was likely because slop in the adjustable combined with high torque and slippage (especially after repositioning the wrench) might bugger-up the nut.
Fine teeth and more engagement may indeed be the way to go. Once the Milwaukee design gets out into the marketplace - maybe we will see how it fares. There might be some good and bad (i.e. unintended consequences) with fine teeth - relative to speed of adjustment and/or need to keep dirt out of the teeth.

BTW - I think that Klein’s adjustables use a 4 tooth engagement:

Maybe Irega is the OEM for them as well ??

I’ve bought so many over the years and most have the annoying slop. I have a small one I got at Garrett Wade many years ago that truly stays put, but I can’t find them anymore. Now I use knipex. I like them a lot because they have a sort of ratcheting action to them.
https://www.amazon.com/Knipex-8603250-10-Inch-Pliers-Wrench/dp/B000X4OG94/ref=sr_1_2?s=power-hand-tools&ie=UTF8&qid=1512094646&sr=1-2&keywords=Knipex

I’m not sure of the brand name (I have emailed McMaster-Carr before ordering and gotten the information), but have ordered this for my boss. He loves it, says its the best adjustable wrench he has ever had. It stays where you put it.

McMaster-Carr is the complete source for your plant with over 595,000 products. 98% of products ordered ship from stock and deliver same or next day.

I’ve picked up a few Chennellock wrenches for cheap at the flea market. I like them much better than others I’ve used, to include US made Crescent wrenches. Haven’t even seen the Milwaukees yet, though.

Stuart - Please could we have a Toolguyd head-to-head of these Milwaukee adjustable wrenches vs. Channellock?

Your community needs you!

I have a bahco a few years old which I think is as good as these get for slop. Some top quality Japanese “lobster” brand are really no better.
To eliminate slop you need another approach. Either the biggish stanley adjustable that incorporates a vise grip type mechanism. Many people seem not to like this but I find it very good to avoid the wrench slipping on the nut. Or the knipex pliers wrench as already recommended. These are superb, i’ve tried them! Cost is their only downside. I would buy the full set in a heartbeat if I needed them for a paying job rather than a simple “do it yourself” preference. Maybe a good tool to put on a christmas wishlist ?

We bought our first Knipex plier-wrench 17 years ago to try out. The guys loved them so much that a few pairs went into each truck. With some practice alternating your grip they have a ratchet-like ability. But you do need to grip them - so they are not 100% replacements for an adjustable or open end wrench. As an example adjustable wrenches might be easier to use in pairs with one opposing the other - or one up against a wall or other solid object to oppose the torque being applied by the other.

I only found these for the first time last year. A rep at a show handed me the smallest size and asked me to grip the edge of a piece of thin steel sheet. He took a good grip of the sheet and we played some serious tug-of-war. A single handed grip was all I needed and it never slipped. I’ve taken my own advice and asked for the 150mm size for Xmas ! That will cover all the metric nuts and bolts that I use the most often (M6, 8, 10, 12) and more. Maybe i’ll get lucky

I finally got the Milwaukee wrenches in today, so bear in mind this is only first impressions. The 5-6 points of contact between the wheel and jaw definitely help over typical 4-slot wrenches, and the machining seems to be to much closer tolerances on this one too compared to typical cheap wrenches with wide channels that barely engage smoothly. The slop in the 10" looks to be about half a mm marking, so around 1/64 of an inch, maybe a touch less. The small 6" one is even better, barely the width of one of the line markings on it if I’m really trying, and bordering closer to almost none. I think the slop on it comes more from the entire jaw’s bar slop in the guide holes than slop in the hand wheel moving back and forth.

Compared to a general wrench like Husky or Kobalt, these are definitely a big step up. Compared to the other adjustable wrenches I own, very old Crescents and more recent blue-overmold handle Irwins, these have less slop and hold better. I don’t have any “high quality” wrenches like Bahco or similar to compare, nor do I have channellock or Irega wrenches, so I know it doesn’t help your question a ton. We’ll see how they hold up through some use, if they loosen up any from new out of the packaging. I will say they feel pretty solid, have a good weight to them, definitely better than any other HD or Lowes stocked wrench I’ve ever handled. The adjustment wheel is easy to roll with one finger, there’s no sticking or jamming or that occasional annoying catching when a new tooth tries to engage like cheap wrenches have. For the price ($25 for the pair from Acme, less if you use a coupon), I think these are going to be the ones to beat.

I’ll try. But just know that I’ll be biased going into it.

Thanks @ToolGuyd , I’ll definitely look out for your review!

I noticed a very small number of negative reviews of the Channellock wrench. These were because of the gap between the rubber grip and the actual wrench inside it. (E.g. water ingress into the gap or even the rubber grip slipping off under high load). Do you think this is a real or imagined problem?

I also saw that Facom make some beautiful looking wrenches. They look as good as Nepros, but without Nepros’ crazy price. I’ve never seen the wrenches in the metal, but I’ve always found Facom tools to be outstanding. 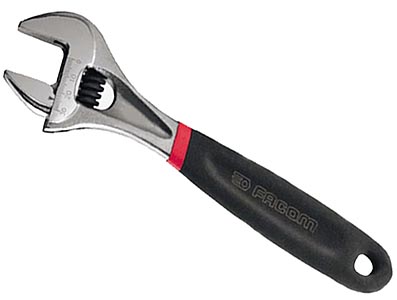 I have a Facom somewhere, can try to compare that one too.

The grip won’t slip off. There’s a red hard plastic component which seems to be a positional stabilizer.

If it’s a big concern, they also have un-gripped wrenches with slightly lower jaw capacity.

If someone is really concerned, maybe they can cut the grip off and use the wrench bare. I’ve never had a problem with any of these wrenches.

I am on my second Channellock 8" extra wide jaw wrench (the first was with tools that were stolen). I really like it, it’s
my favorite adjustable wrench I’ve had. I do have milwaukee 's also but these days mostly use the small one 6" I think . I don’t like the feel of the milwaukee handles, I even prefer the old, classic style, craftsman s I have in that size. I can see the Channellock being prone to the handle problems you describe. My current one is about 6 years old and the rubber is getting slightly loose as well as starting to rip a little by the head. I can imagine water getting between inside the handle, maybe freezing. I don’t see how the rubber could slip off without it degrading a lot more first though.

The jaws on the Channellock are nice because they are a bit longer and thinner than traditional adjustables. I Also Really Like The xtra Wide Capacity, I Think They Call It Wide Azz Now. There Is Less Play Than Most Wrenches At a Similiar Or Less Price And I Dont Think They Back Off Much During Use. I Think The Milwaukees Are Probably Slightly better jaw action, less play and back off, but they are both close. I just don’t have a lot of time using the Milwaukee’s yet. I will say a handful of years ago I bought a crescent brand wrench online thinking it would be good quality and was sadly disappointed with the excessive jaw slop, it wasn’t any better than the cheap, bargain bin type off brand wrenches.

We’ve got a bunch of the Channellock (Irega) ones at work, and are generally very happy with them. I also have a set of the Wera Joker ratcheting wrenches, but we work on so much odd-sized stuff that they don’t get used a lot.
Anyone know of high-quality options for a really large (2-1/2-3") adjustable wrench?

Here is one choice - not very strong - really meant for slip nuts.

Find many great new & used options and get the best deals for Super Tool Vertical Aluminum Pipe Wrench MFTN68A JAPAN at the best online prices at eBay! Free shipping for many products!