Amazon has this 3 wrench set for $118. https://www.amazon.com/gp/product/B015NL4X8K/?creative=9325&camp=1789&tag=dealnewscom&smid=ATVPDKIKX0DER&ascsubtag=q85woccssys2hb1o0sri9bU9xCanxohW

For $120, they have the 3 wrench Cobra with the fatter handles. https://www.amazon.com/KNIPEX-Tools-Piece-Multi-Component-9K008005US/dp/B07GZD3WJD?th=1

Since price doesn’t matter, is there a collective opinion on which are the better wrenches? Better to me means quick adjustment without slipping.

I think I would get the cobra set (the second one) if only because I like those handles better and I like the non-flat jaws. I have a version of that but not that exact thing.

the flat jaw does come in handy for some things and is less likely to mar items like plumbing fittings. so depends a touch on your normal work load.

I have several sizes of both Cobras and the Pliers wrench. I don’t feel that one is “better” than the other generally speaking, in my opinion they are different tools for different jobs so which is best depends on what you are doing. They are equally fast to adjust.
The pliers wrenches have smooth parallel jaws. They do not work on rounded objects like pipes. They do not work well on rounded-over fasteners. They work extremely well on objects with a hex or flats like nuts, bolts, and many pipe fittings. They also work well as a mini press for flattening things, pressing in roll pins, and so on. They are also good for bending metal. The Cobras have notched jaws with teeth and do not have the parallel action so you can’t flatten things or press things with them. They grab round things like pipes very well. They do grip hexes of course, and they also will mar fittings so they may not be the best choice for those shiny chrome valves under the faucet.

I would advise putting together a mixed set, I have many sizes of each, but the ones I use the most are the 5" (125mm) pliers wrench, the 7" (180mm) Cobras, 10" Pliers wrench, and 12" Cobras. If you told me I could only have three of those it would be honestly difficult to pick which I’d keep.

Thank you for the thoughtful replies. I liked the Cobra, but I was drawn to the lock mechanism in the photo. My needs are more varied so the cobra’s are a better fit, based on your explanations. 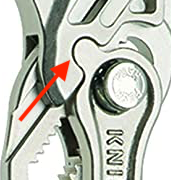 Yep. Also, the pliers-wrenches can exert tremendous pressure, multiplying your grip force by 10 or so, compared to maybe 6x for the Cobras. To some extent, that makes up for the lack of teeth in the jaws. But you have to squeeze both handles to maintain the grip. The Cobras, famously, need pressure on only one handle to turn a nut once the jaws are dug in, and they can grab pipe, as Mecha says.

So far I only have two pliers-wrenches and one little Cobra, but maybe that’s because I don’t work with pipe much, and I don’t like chewing up nuts if I can help it.

that’s maybe why I don’t own a set either in that people view these as adjustable wrench replacements - and in a way they are. but I don’t like adjustable wrenches either. I’m a fan of using the right size proper wrench as much as I can to keep from making things worse.

IE toilet repair I’m walking in with a collection of double box ends.

You raised a good point that I missed: The Cobras are self-gripping while the Pliers Wrench are not. They’re even self-gripping on round things like pipes as long as the material is not so hard that the teeth can’t bite in.
Also, if you do any electronics work the pliers wrench is good for crimping some kinds of terminals such as IDC connectors for ribbon cable and Scotchloks.

I think it’s misleading to think of these as replacements for an adjustable wrench because they avoid the major flaw which the adjustable wrench has. I don’t like adjustable wrenches either. The problem, in my opinion, is that there is always slop in the moveable jaw. There will be less slop with a higher quality wrench compared to a cheapo or a worn-out one, but no matter what there will always be some slop there. So when you apply torque with the wrench that slop gets taken up as the moveable jaw gets pushed out, and now the jaws are slightly too wide for proper engagement so you get edge contact along the corners of the fastener which can mar them or round things off. Neither of these Knipex tools has that problem. The pliers wrench has very high leverage, 10:1 like Koko mentioned. The Cobras are self-gripping due to their geometry. So when you go to apply force with these tools there is none of that looseness or slop going on like there is with an adjustable wrench. It’s rare that I use an adjustable wrench but I use Cobras and pliers wrenches daily. IMHO working on the fittings under a sink or behind the toilet is an ideal use case for the pliers wrench, it won’t scratch the finish and you don’t have to worry about what size(s) to bring.

Exactly. Adjustable wrenches (the old “crescent” style) round off nuts, just a little, every time you use them. And the ones I’ve used can lose their adjustment if you drop them or even shake them. Maybe the nicer ones have less of a problem with that, but as Mecha says, these Knipex tools don’t have that problem at all.

And box wrenches have to have a little slop built in, or else you couldn’t get it on the nut. They can’t GRIP the nut the way these Knipex tools can.

what cheap box wrenches are you using? I will admit there is always a tollerance margin but they are often chamfered on the openeings to help get on - but are accurate in the middle.

I agree a bit on the adjustables but even with a good adjustable I find they work decent provided the nut it’s on uber tight and also you have to bottom out the wrench fully when you engage them. I think alot of people don’t do that and only count on the 2 face contact - that doesn’t work as well. bottom it out to the base of the jaws.

but debate nonetheless - get either of those pliers if you they are good to use. or consider maybe some of the alternatives if you won’t use them everyday. Like the new gearwrench devices