Purchased Kobalts new design Table Saw with sliding extender ruler and extra support plus larger amp motor. Assembled if finally and went to operate, but, because I was a Machinist for years I thought I would check the blade to see if it runs out. IT DID ALLOT. Called Lowes they say to call the warranty number on the warranty packet. Well, after 2 hours at Lowes customer service desk they tell me Quote"we do not service Kobalt tools." Blew me away. After long hemming and hawing they wrote up a repair tag. The problem with the saw is. The flange on motor where blade rest against was pressed on not perpendicular to shaft for a total run out of .078 which makes the blade at 4.75 higher run out .138 stupid blade cut a 5\16 wide slot when it should have cut 1\8. I have an old Delta shopmaster that still runs and cuts. I got this piece of crap Kobalt for Christmas. DON’T BUY AND i MEAN DON’T BUY ANY KOBALT PRODUCTS THEY ARE ABSOLUTE CRAP.

While I’m not a big fan of their stuff and would never buy a kobalt something that is powered (well I did get the 12v drill/impact/saw combo for $30 on clearance but my wife uses em for crafts)I have a hand full of their hand tools that work quite well. I’ve been having some hate/love issues with Lowes for awhile… What’s the point of having a pro service desk and then offer the services themselves? Someone at Lowes HQ said “hey let’s offer the same service that half our clientele that buy from us do.” So now not only do I have to buy material from them I have to compete for labor from them too???.. I’ve found myself getting materials from Menards more and more lately but I’m starting to get annoyed by them to… I have to wait in line for someone buying groceries!!! I miss the days of the lumber store!

If in your shoes, I probably would have returned it.

Although it is not too helpful now, I do agree with what is said above, and I stay away from Kobalt for power tools. However, being that you said you were a machinist, I wouldn’t buy any portable table saw and expect machinist accuracy out of the box. Jay Bates did a post on his site about having the same experience, but first with a Ridgid table saw, then with a Grizzly I believe. Ideally you will get the best results for accuracy with a cabinet mounted trunnion vs a table mounted one.

For me, the table saw is rarely used for finish cuts where that level of accuracy is needed, so my portable Ridgid table saw works for me for now.

This is kind of a sad commentary on the state of affairs with regard to quality of some table saws being shipped from Asia. My 40 year old Unisaw is still pretty good - but I check arbor runout once in a while - especially when I change a blade. On one occasion it seemed like it had become unacceptable - but then I thought to check using a different blade - and found that the brand new blade was the culprit. BTW - this is not an endorsement of a new Unisaw (my old one has a sliding table) because I’ve seen mixed reviews about it and especially about its sliding table. So while, I would definitely steer clear of Kobalt - I’m not sure what I’d recommend anymore for a home shop use - maybe a Felder, Hammer or Oliver if you have a really big purse - or one of the popular jobsite saws from Bosch (the ones we used), Dewaltt or Makita - but nothing I can think of in the price range of the Kobalt.

I totally agree What ever happen to Western Lumber, or A simple drive thru the lumber yard just to shoot the pervereable BS. I miss the simple old days too. Hardware isn’t that much different either. Out here in New Bern N.C. we still have Mitchells Hardware that has been there since 1927 and doing very well Thank God. Why do you think they call Lowes >lowes> same reason they call a computer store Fry’s. Just a thought.

I have a Kobalt cordless impact wrench that has been fine. A couple friends have Kobalt power tools that work ok for them. A sample of one is not enough to say a line of tools is junk. I know people that have had trouble with Dewalt, Milwaukee and other major brands as well.

Checking blade run out is pretty standard procedure for anyone setting up a table saw. I had to do some adjusting to my C-man table saw when I bought it to get the run out down to an acceptable level.

So who is actually supposed to service Kobalt tools if Lowes doesn’t? I think I would have returned the saw also.

Anyone see the new 24v brushless line? They announced em over the W/E with the Vagas NSCAR tool event… Looks interesting but IMO they have a long road to proofing themselves. TIA and PTR were there.

Yeah @realtoolreviews has been posted a ton of that on his instagram. Doesn’t look too appealing to me, but hopefully this means Kobalt is stepping up it’s game. Sadly it appears they are trying to differentiate themselves with the ‘24vMax’ as opposed to just making some better quality tools. Time will tell.

I had the opportunity to go to the Kobalt event, but I couldn’t make it work. To be honest I wasn’t expecting a brushless tools roll out, much less a 24V one. I figured it’d be some new tools like the auto adjusting wrench. Even if I had known about the cordless tools, it still wouldn’t have worked.

I’d really like to see where they price these tools. Are they going to use the 24V Max as an excuse to price them similarly to Red, Blue, Yellow, when all they are really doing is adding a cell to the pack?

I kinda like the look of the drill: (damn it didn’t copy the photo) 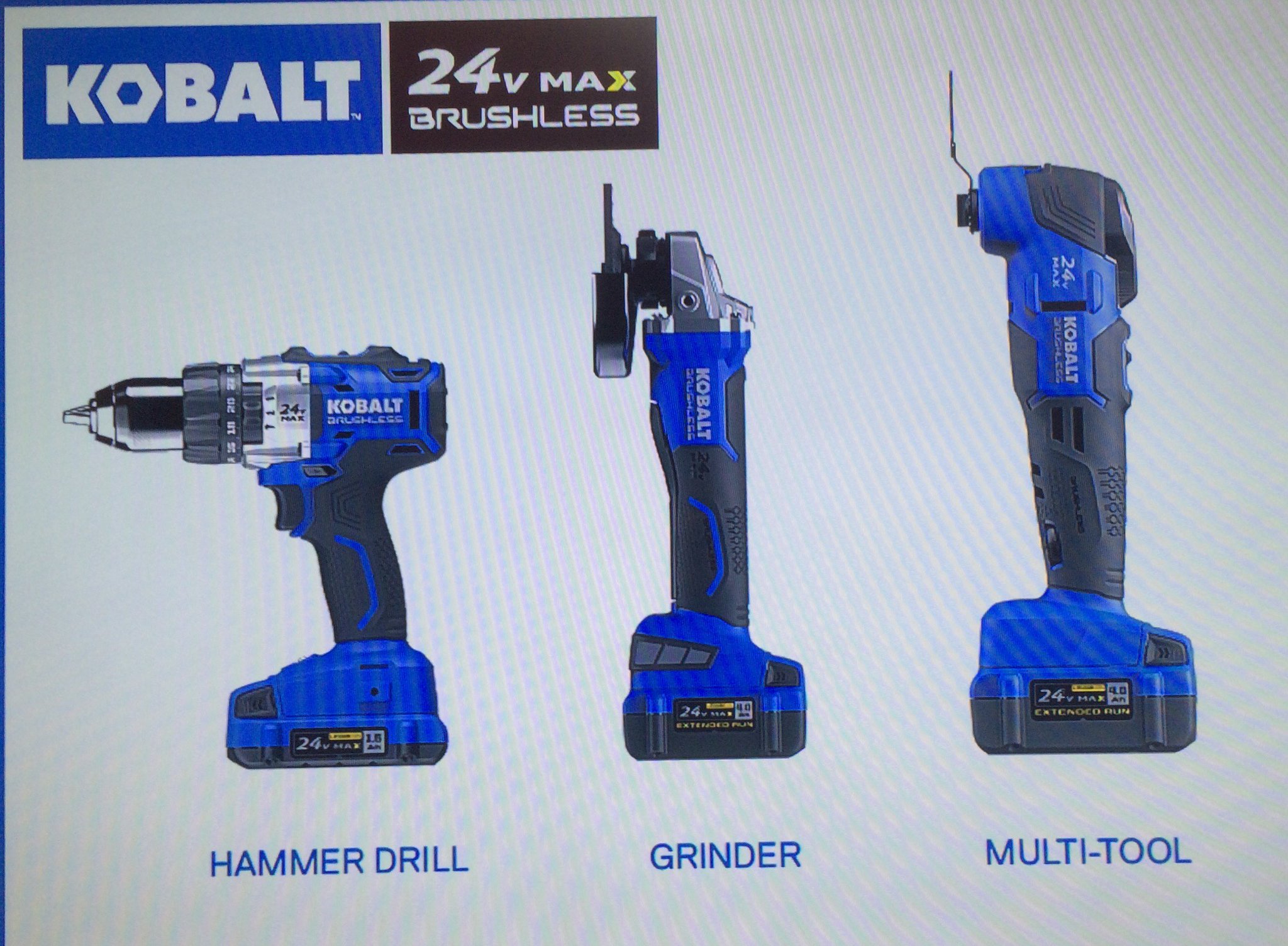 Its odd to me still that Kobalt hasn’t targeted Ridgid more as their competition. Isn’t Kobalt exclusive to Lowe’s to some extent?

100% Lowes brand. Tho this is the OEM http://www.chervon.com.cn for their power tools. Ridgid and Ryobi are exclusive brands to HD but not owned by HD.

My understanding is that the Ridgid brand originated with the Ridge Tool Company (out of Ridgefield Ohio) - makers of wrenches and plumbing tools. Somewhere along the line they were acquired by Emerson Electric. For many years Emerson produced many of the stationary power tools (like table saws) that were sold under the Craftsman brand by Sears. When Sears decided to switch OEM’s - I believe that Emerson cut a deal with Home Depot (HD) who was had become the dominant force in the Big Box Home Center Store business. It would seem that Emerson licensed the Ridgid name to HD to be applied to other OEM’s wares sold at HD. The original Ridgid name still is applied to plumbing tools made under the Emerson Corporate umbrella - and widely sold beyond HD. So now you can find the Ridgid name applied to things sold at HD - like shovels made by Ames, drill bits made by Blu-Mol and Disston (R.A.F. industries), extension cords made by Cerro Wire (Berkshire Hathaway) and power tools made by T.T.I.
I believe that other Home Depot House Brands include: CE Tech, EB-Everbilt, HDX, Homer, Home Gardener, Home Gardens, Husky, Rockforge, and Workforce.
Lowes seems to have a few house brands to - beyond just Kobalt. I think that these include Blue Hawk, Duraworx, Garden Plus, LG Sourcing, Precise Fit, Task Force, and Utilitech Pro.

Sounds 'bout right… I tried to sum it up in short.

Oh, they do target Ridgid.

A few years ago, Kobalt drew comparisons to Ridgid, and then Ridgid countered.

Okay, but now they don’t come across to me as comparable tool lines, and reviews normally show them being worlds apart it seems. I would at least think Kobalt and Lowe’s would have tried to compete with the LSA of Ridgid.

I have a Ridgid wet/dry vac, and Ridgid table saw, but I think that is it for me so far. My buddy has mostly ridgid tools and they seem nice.

My brother-in-law has the Gen x5 Brushless kit… they are truly pro level tools. I know Kobalt is coming out with a new 24v line, but as of right now there is no comparing them, its like a 2016 F150 vs 2005 Ranger.

Back in the day I was on some Ranger forums, and it seemed like it quickly became former Ranger owners, who had upgraded to F150s, but stayed on the forums.

Noticed some clearance tags on the 20v stuff… didn’t pay much attention to the pricing, but watch for some big discounts as the new 24v line is coming soon.