The other day I was bidding on a out of print record, limited to 300 copies. It was a album I already own but had the biggest desire to own the limited edition 12" LP.

This made me think about what other kinds of things would I want if “limited edition” versions existed.

Would you buy limited edition tools? Say “your” brand offered a new tool with different branding, but limited to 1,500 products made. Say milwaukee releases a new 18v fuel impact driver, but the color scheme is flipped. All the red parts are now black and the black parts red. Limited to 1,500 worldwide. Would you have the desire to buy it? What if there was a 25% markup for it?

Bridge City Tools does something akin to this:

I’ve never bought any - and would not likely buy a limited edition Milwaukee et. all tool in the hopes it would appreciate in value.

I’ve bought some tools as collectors items - almost exclusively old planes from English makers. Not sure if any of them have really appreciated in value. I’ve also bought a few things like paintings at auction or in galleries over the years - mostly because I had a spot on the wall where I could appreciate looking at them. I think that some may have appreciated in value - but time will tell - and it will likely be my children who will find out after I’m gone.

Last year Makita released 100 year anniversary kits in metallic teal with black cases in some markets. I don’t think there was any price premium. They stayed on the shelves for a very long time, the unusual appearance not appealing to many.

Honestly, I got it only because I found it in a tattered box on a clearance shelf at K-Mart in 2002 for $30 or so. It still works, though the original fancy battery and the super-cheap charger both died. Found three regular batteries on clearance at Wal-Mart just before B&D stopped selling the 14.4v stuff and used it a handful of times more. Then I upgraded to the Porter Cable 18v system and now to DeWalt. I’ve spent the past few years charging the batteries every few months for some reason, but haven’t used the drill for over four years.

If were to fill a need and it is without a price premium. Probably.
Just like any other tool one needs, brand, durability, value, …

If it carries a price premium. Pass. Why pay extra?
If it is already a tool I own. Pass. Plenty of stuff I don’t have yet.
If it involves battery power and/or is some specialty thing. Pass. There is no value in a NIB "limited edition #0010/1000 tool only separated by the color scheme or accessory … when it can’t even run.

I have a retired family member who is well stocked up on tools, despite not being into DIY or building anything really. Everything nice and stored in their containers. Had to help him with a couple small projects. I did not have to worry about tools … except not a single of the cordless tools works because of the battery. So at over half a dozen handy tools, that’s easily $500-1000, that could have been better spend on simple corded ones.

Having seen my $700 Ridgid LIFETIME replacement power toolkit obsoleted due to "sorry, we don’t have 24v batteries any more " (so much for lifetime warranty and replacement) … and battery centers saying “sorry, we can’t rebuild li-ion batteries” … and a couple other dead battery things; I now value the cord.

How about a Makita anniversary edition tape measure:

I bought the Veritas Stainless-Steel Marking Gauge - Limited Edition a couple of years ago. I don’t regret the purchase. 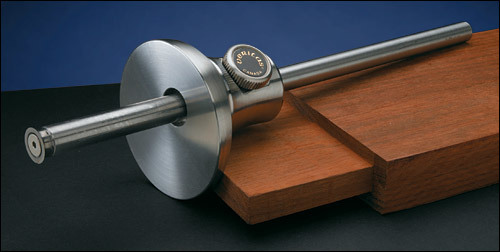