Howdy everybody! I received the Makita LC09A1 12V vacuum today that was recently talked about on the main page, took some pictures as I unboxed it, but wanted to get a few impressions out there that may be helpful to anybody on the fence about deciding or similar. So just a few specific things I’m going to touch on here rather than a full “review”, since I hardly used it tonight aside from a few tests like getting cat hair out of my cat tree where they sleep, and sucking up some drywall dust.

Size. The cleaner is a lot bigger than I thought from the pictures. Even reading the dimensions, it didn’t quite come across accurately what the size of it was. Maybe you think a 12V tool and that’s why it’s deceptive, I don’t know. The tool itself is about one standard gallon jug size, with another 3” on top for the handle. The case is even bigger, like 3 gallon jugs stood up side by side. Here’s some pictures. 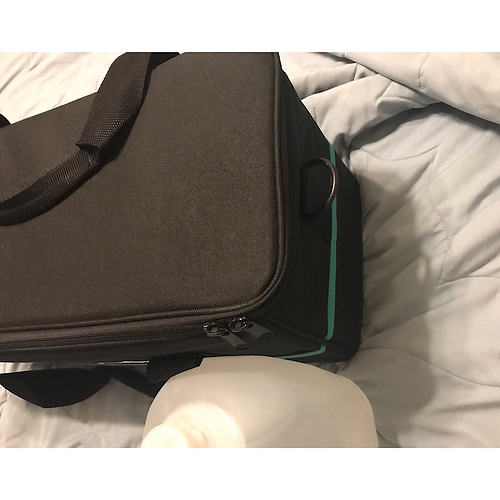 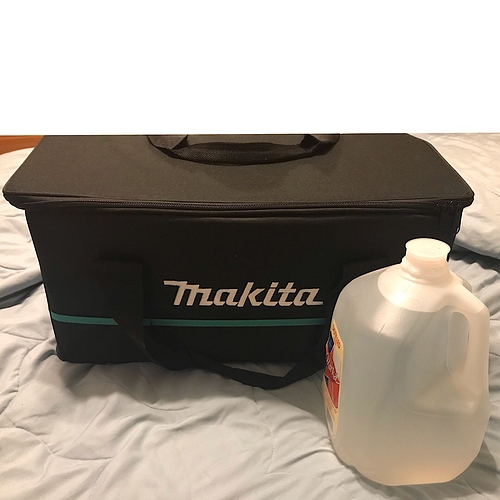 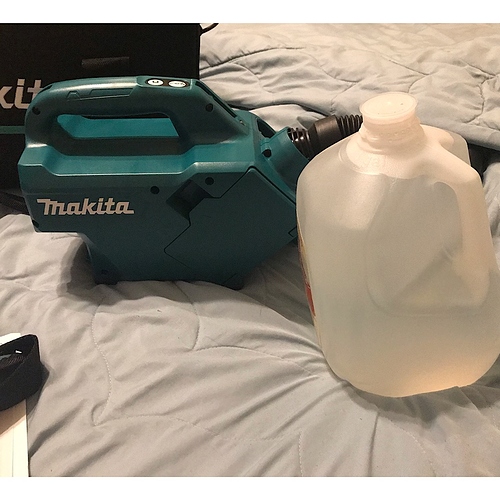 The bag is quite large, which is maybe a downside because it takes up a ton of room in the very small trunk of my car, if I were to continually carry it with me. Even for taking to a job site or something, I think the case is just a tad bigger than I would want. Again I’m probably comparing in my mind to like the makita 12V cutter which is a small zipper case, next to which this thing is just huge. We’ll see how it goes as I use it more and more, I am glad that everything fits in very comfortably, and I could even throw a couple rags and spray bottles in if I wanted. All the attachments do take up space, as well as the blower hose and charger, so I don’t see how they could have made it much smaller in the end, so just with a large unit, goes a large case. I do appreciate that they put anchor points for the strap on the case though, so you can use the shoulder strap with the case if you want, as well as with the vacuum itself. Here’s some pics of that. 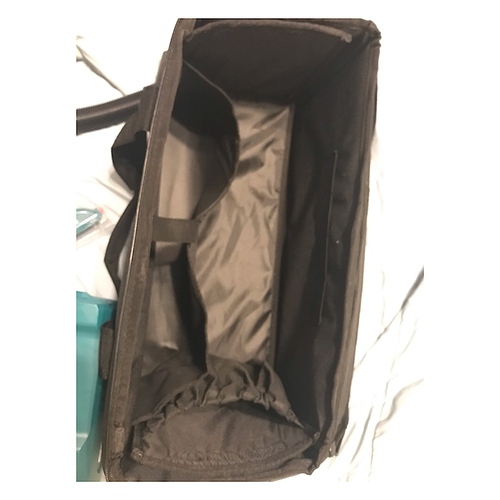 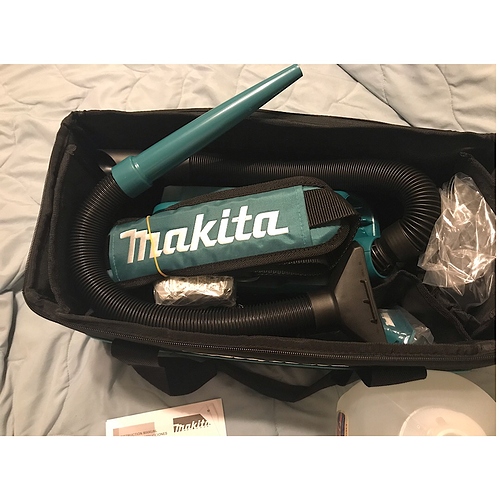 Looking at the attachments, there’s the blue brush end snorkel, which is stiff plastic the whole way down, which is good, and I think will be very useful. The brush part clicks into detents at straight and 90 degrees, that’s it. But it has more than enough friction to stay where you put it if you only turn it partway. The regular snorkel nozzle is grey and rubber, so it has some bend to it. It also has some extra slits near the hose end, presumably so it puts less strain on the vacuum. The wide nozzle with solid plastic spikes worked wonderfully on my cat hair test, digging in so the vacuum could pull hair out. The wide nozzle with side brushes and the fabric strips on the bottom also worked well at grabbing hair and pulling it out.

The hose and more so the blower hose were possibly the biggest surprises on the vac, and not necessarily in a good way. The main suction hose is permanently attached, the ball joint that lets it pivot is not just a pull-out type, you’d actually have to take the vac body apart to get that hose off. You also can’t “unscrew” the hose from the ball end plastic as far as I can tell either. The suction hose itself is nicely flexible, not easily crushed, and extends to about 3-4 feet long. I would have liked to see some more hose length, or like the Milwaukee backpack vac multiple hose options. It’s not quite long enough for me if I’m carrying the vacuum in one hand to do everything I want with the other hand, sometimes I have to swing the main body forward to get enough hose to get to a reach spot. It will likely be better for using the vac on a shoulder strap, where it sits higher and on the same side as your arm.
The blower hose is the main thing I wanted to talk about. My mistaken impression from the pictures was that it would be nicely flexible and maybe extendable, just like the main suction hose. It doesn’t extend, and while it is acceptably flexible, it’s a harder plastic than the suction hose, almost more like the hose on a high volume inflator. The end is permanently attached, and concentrated the airstream down to about a 3/4” circle opening. Here’s a pic of that hose. 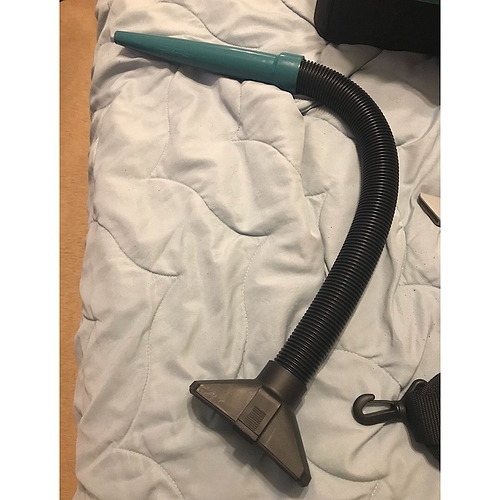 The blower hose clips over the exhaust outlet at the back of the vacuum body. The suction hose stowage on the front has channels meant so you can stow the hose and it can still get air for the blower function. Using the blower hose definitely cuts down on the airflow of the vacuum, so my idea of blowing and vacuuming at the same time may be a little questionable, but on the higher settings it may be fine. The blower is not the strongest, you can hear the motor working a bit with it on, and it’s nowhere near either a can of air, compressor blowgun, nor one of the miniature workshop blowers. I’d liken it to somewhere near a high volume inflator if you decreased the hose size and made the output airstream nicer. I’m a little disappointed that you can’t remove the concentrator at the end of the blower hose, since I think I could actually use it for my air mattress then (it won’t let the excess length in far enough to get to the width it needs). For blowing off tools or general blowing out computers, I think it will work well, but it won’t get like the fan blades or filters or such in a computer that really need the compressed blast of air rather than a stream of air.

The suction was pretty good, makita labels their modes as high, max, and low. Though the tube size is different so that plays into CFM numbers, I’d put the non-scientific “felt” suction on high as on par with the M12 Dustbuster, better than the ryobi dustbuster. Max ticks it up a bit, not as much as I might expect, but enough to put it solidly ahead of those type of vacuums, and more on par with a Dyson v6. Keep in mind these are just my guesstimates comparing with my hand feel of the suction on these different vacs, so not scientific. The low speed drops it way down, which is actually good for picking up loose dust or dropping drywall dust, I imagine it would suffice for sucking up sawdust, and conserving battery life (I don’t have battery life numbers yet, sorry!). If 0 were completely off and 10 were it’s maximum suction, I’d put “high” at about an 8, and “low” around a 3, if that gives you any indication.

All in all, a few things I was a bit disappointed about:
Blower hose itself
Suction hose permanently attached

A few things I was happy/neutral with:
Good attachments
Good size carrying case for carrying everything, plus hooks to use the shoulder strap
Filters seem decent and not overly small for the intended use, plus they’re bags which I like.
Suction met and exceeded my expectations for a dust buster, but doesn’t match the 18V 2gal class vacuums.

And a few surprises, I have yet to see if I like or don’t:
Size
Suction hose length
Blower function is interesting, better than a high volume inflator but worse than a blowgun.

Let me know if anybody has any specific questions, I can try to answer them! I hope this helped some folks maybe on the fence with a little more information and impressions, to better educate their decision making.
I’ll be keeping the vac to use in the car or tent on trips (like to get sand out after the beach), and with my robotics team since it should still suit their usage pretty well. I’ll likely leave it in the house for a while first, compare it with the Dyson v6 I use for quick cleanups all the time. I like the changeable batteries, attachments, and the suction seems comparable to non-max-Dyson, but it is missing a larger dusting brush, and a motorized brush. That’ll also give me a better chance to gauge the usefulness of each of the three suction levels, and get a better idea about battery life on the 2Ah batteries, since I don’t have any 4Ah CXT batteries anymore to test with.

I’ve tried various shop/car vacs, but can’t get by with just 1. I have to use a small corded shop vac, which is noisy as the devil but has great suction. It’s cheap, compact, and and handy. For small dust piles, I use the DeWalt DC515B, which is the old 18v version of the newer DeWalt DCV517B. I bought a 20v Max adapter for it, because that expensive old 18v battery will certainly die. The small DeWalt is pretty light, wet/dry, instant to use, and you can also pull out a short hose to access tight places. Suction is just OK, but perfect for small dust piles and floor mats. It bounces around from my home, shop, and car, and is handy in each.

The Makita sounds a lot like the bigger DeWalt cordless, which is 2 gal. and looks pretty bulky. Thanks for the review Tim.