Hi. Saw this deal on the Makita 18V hammer drill:

What do you guys think about that? I saw in another thread/post recently that ppl were saying hammer drills are useless (and to get a rotohammer instead).

Looks like the Home Depot description may be wrong. It says hammer drill in the description but on the Makita page it’s driver only: 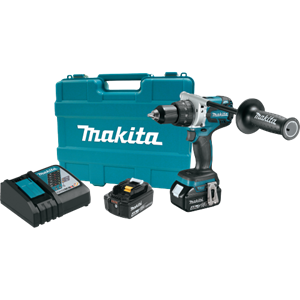 Yes it’s a hammer drill and yes it can poke holes in concrete/brick etc… No, not useless but a rotary hammer is much more efficient at the task. I have a DeWalt hammer drill that barely gets used but I have it when I do need it’s hammer function and the moment I leave it at home is when I’ll need it next, so I’m glad I have it ready.

What do you think, Fred? Would a hammer drill like this serve as a good all-purpose drill too? Or would you go for a driver only?

It all depends on the work that you do.

A drill is often the first tool that anyone buys. It obviously can be used to bore holes in wood and metal - maybe masonry if you have a hammer drill - or a lot of patience. It can be used as a makeshift grinder, wire brushing tool, circular sander, rotary rasp and lots of other things folk have thought to mount on a shaft to chuck in the drill. It isn’t always the best tool for these jobs - but you can make do. Having a hammer - function might be a plus if you drill masonry once in a while. The price you pay is that the hammer drill may be heavier, noisier and cost more. It would be great if you could put this hammer drill in you hands to see what you think. Buying a hammer drill would not be my first choice - but I already have other options at my disposal - including 2 rotohammers, a 18V drill and a 12V drill and 2 impact drivers (1/4 and 7/16) - so my case may not ber pertinent for you.

Driver drills are often sold in combination with a cordless impact driver. If you drive lots of screws or lags - this tool is a big step up in productivity and even quality IMO from just using a driver-drill. I see that some have been tested/compered here.

If you plan to drill lots of holes in masonry/brick/stone - then a step up from a hammer drill to a roto-hammer would be in you interest.

I’m back to thinking that you should see what you could get in a driver drill kit for $180 - and if at all possible try to put the tools in your hands or buy from a source with a good return policy.

As an aside, my dad held the philosophy that hammer drills are built to withstand the “hammer” blows, and would therefore have heavier bearings, housing, gears, etc. So while they aren’t great at hammer-drilling, they would last longer and be generally more he-man than ordinary drills. Of course, he didn’t work with tools all day long, so he could afford a philosophy.