Okay, this is not about tools, but you guys have been really helpful in the past, so I’ll give you a shot again. Bear with me as a describe a slightly complex issue.

I am now in charge of a science lecture series, and part of my job is setting up the PA system. The speakers go on folding speaker stands.

The stands have three legs that are mounted to a collar that slides up and down the main shaft (folding music stands work the same way.) The sliding collar is some kind of plastic, with two ears separated by a narrow gap, one ear with a hole and the other with a captured nut. A bolt with a knob handle enters one hole and threads into the captured nut, and you hand-tighten the knob to secure the collar. The threaded shaft or bolt is tangential to the main shaft, so that tightening it makes the entire collar squeeze the shaft on all sides. Here is a photo of something similar (thanks fred!) 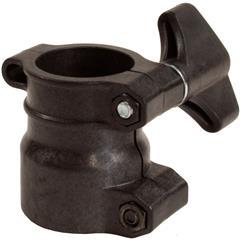 The problem is that when the collar is tightened and the gap between the two ears shrinks, the two ears go out of parallel. That puts a remarkably strong bending force on the bolt. Over time the bolt bends, eventually making it impossible to turn.

So any ideas on how to prevent that problem? I have thought about replacing the captured nut with a threaded ball, or a rod threaded transversely, so it acts like a pivot and the bending forces are released. But the holes themselves are fairly long and tight, and I might have to enlarge them so that the ears can’t bend the bolt. But that seems like a clunky solution.

Is this the sort of collar that you have:

If so it may be a combination of the nuts at either end that put to bending forces on the stud that part of the knob.
How about getting a hand knob with a longer thread, get rid of the captive nut in favor of an out board washer and a nut that will let the rod pivot a bit as you tighten it? If the through hole in the clamp “ear” doesn’t have enough clearance around the threaded stud - this may not work - and drilling the hole out to provide more “slop” may weaken the ear.

Yep, it is similar. Thanks!

And yes, I was thinking along the same lines. So I’d replace the nut with a short rod threaded crosswise, or a threaded ball. I guess I’d have to thread them myself. Not so easy, now that I am living in an apartment and lack access to even a bench clamp.

But yes, those holes in the ears don’t offer much clearance. I might try using a thinner bolt.

What a stupid design.

Some clamping devices like this that use a threaded bolt and knob - use a barrel nut at the other end - that can rotate a bit as the clamp is pulled up.

It’s possible that you’re operating well beyond the intended weight range of the stand. The collar appears to be a very light duty collar. So consider upgrading the entire stand if you think it’s necessary. Keep in mind it’s also a safety issue. With a moderately heavy speaker on top of a light duty stand, it could be a tipping hazard.

Assuming that’s not the case, another option is to order a 2 piece shaft collar (McMaster.com). It will require a hex key to tighten and loosen, but it will be rock solid assuming the shaft you attach it to is solid. This is fussy to adjust with a speaker on top of the post, but it’s cheap at $5 or so for a 1" collar.

If you want to get fancy search for a quick clamp shaft collar on Zoro. It looks like they come in metric sizes, but you have a little bit of adjustability on the tension. A 25mm approximates a 1" collar and that runs $34.

I found the quick clamping shaft collars on Amazon (brand is Ruland) for $28 shipped for a 25mm. They have other sizes as well (all metric). I’m not sure how much latitude you’ll have with the bore size. I think you’ll get away with 0.5mm but 1-2mm off might be iffy.

That would be perfect. I was thinking I would have to make them myself with a tap. Thanks again, fred!

It is possible I am overloading the stands, but the speakers aren’t extremely heavy (maybe 30 pounds) and the stands are built to hold them. I think they are just poorly designed. The tipping hazard is there, but bands and stage managers use similar stands routinely without issues that I have seen. I place them against a wall to limit the risk.

I would consider upgrading the stands, except it isn’t easy to compare stand construction online, and the few physical stores around here that sell them are aimed at hobbyists (like Guitar Center.) Still, I will give them a visit.

The 2-piece collar is a great idea. A quick-clamp would be worth the money.
Zoro, ey?

I think the shaft is 35 mm. That is kind of a standard for PA speaker mounts, for some reason.

You are missing a key part that collar is not designed to torque up so the two sides touch. It’s purpose is to provide friction for the pole (not hold the speaker weight). The speaker pole itself should have holes going through it for various heights to put the speaker. You should have pins that fit through the hole in the pole that will hold the speaker weight. Also the pins are normally attached to a lanyard . The pin is called “Telescoping Pin/ Lanyard”

In a pinch stick a bolt through the holes

The two sides of the collar don’t touch when we tighten it up. They just go out of parallel enough to bend the tightening bolt.

I don’t like the idea of not tightening the collar firmly. Even if it doesn’t take the weight of the speaker, it still keeps the legs from folding. I wouldn’t want the legs to collapse and the speaker to fall on somebody.

I’ll look at it again, regardless.

oddball thought but if oyu used the same spot every time. Or you know close enough to it - would you consider drilling the tube - and running a pin in there such as to take the load of the colar and not require tightening it up so tight.

thus saving screws - etc - and having a fast and easy setup point. with string I tied it off to colar so the pin is always there.