Anyway, it’s new to me. From Einhell, it seems to lack any provision for clamping or holding 2x4s to make a raised support for sawing. But it has a reversible work surface (smooth vs. full of little crevices, maybe to catch fasteners or sawdust.) Folded, it becomes a creeper, thanks to the built-in casters. $187.50 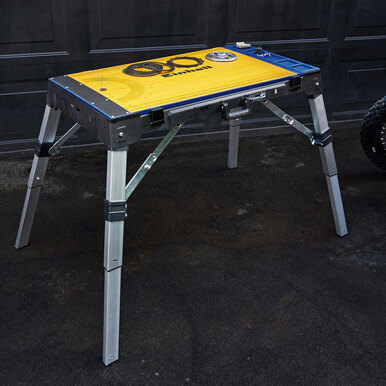 As a workbench for the weekend warrior or a secondary work surface in a more serious shop, it’ll serve the needs of just about anybody.

I bought one in a Savannah, GA-area Home Depot in 2016 for about $60 (on clearance). I think mine’s branded as “Viking” or something similar, and an image search on Google shows multiple other brands that share the design.

Mine was marketed as a work platform (plastic side up), work table (wood side up, it has printed measuring and layout marking that will probably be unusable after a few projects), dolly, and creeper. It also has flip out screwdriver holders and is overall a neat thing to own.

The downsides? This is equivalent to a multi-tool in terms of usability. Will it get the job done? Yes, is it particularly good at a given job? First of all, it’s heavy, much heavier than my Gorilla work platforms and quick setup DeWalt folding work tables. It feels a little less stable in platform mode than my Gorillas and its size just seems off (likely because I’m used to the dedicated platforms). Extending the legs to make it a table decreases the stability, and I’d say it is about as stable as the DeWalt tables at best, meaning it will handle projects but the heavy and rough ones will have to move to a braced work bench. As a creeper…no…I’ve grown accustomed to adjustable headrests and some sort of padding/body support; also, this would not roll easily on anything besides a perfectly smooth concrete surface. Asphalt would probably pose a challenge if there are any imperfections or you’re working down south (where the asphalt gets soft in the heat). As a dolly, maybe, it would roll very easily over smooth surfaces and can handle a little bit of weight.

In short, I don’t regret buying mine despite rarely using it. If space is at a premium, and especially if you won’t have to carry this thing far, its versatility makes it a decent investment. When I had mine set up, I kept it in table mode. I have plenty of work platforms but have used it in that mode before, and in a pinch, it would make a nice base for something heavy that needs to be moved frequently.

at that price and the way it’s setup - seems to expensive for it’s use. I would never put that under a car at that size.

LIkewise with the rings on the top in the picture I expected it to have a spot to hold a router and be a router table. It doesn’t describe one so that’s a bust.

I like the toughbuilt/kobalt work table/saw horses. (I know others make them)… saw horses that take a 2x4 sideways - and you put ply on it to make a table. Not quite as ready portable, but if you need a quick portable table there are some Keter made devices (Husky branded comes to mind) that also work better and cheaper.

Not exactly the same, but I’ve gotten incredible use out of a Worx Pegasus over the last couple of years, and just picked up a second one a couple of months ago – discount brought it to about $115. Open or fold close in a second. Use as a level table, 45 degree slant surface or saw horse. The included bar clamps are good for a lot of applications (not as robust as dedicated bar clamps, but good for “mid level” work). Slots in them will secure 2x4’s when in “saw horse” configuration. You could, for ex, use two of these tables for that, or add the Worx folding sawhorses – they come as a pair and include another pair of bar clamps, and the saw horses and tables are all the same working height so they work well as a set. Also cool: each table comes with a couple of silicone figure-8 rings that will let you link up two the Pegasus tables side by side for one larger secure work table. If you watch sale prices you could get the Pegasus and a pair of the saw horses for about $175 or $180. All in all I find these really useful and great value for the money.

My problem is I keep tripping over the legs.