Gents, if you like NWS pliers you probably know that Lowe’s has the Irwin versions of three of their most popular pliers. A 9-1/2 inch linesman, the compound whatever you call it Exclento(?) diagonal cutters, and the ergonomic angled long nose pliers. $30.99, 17.99, and 27.99 respectively. Great prices.

I wonder if these are being phased out? They were in a section separate from the other pliers.

The compound action cutters and ergo pliers are great. Favorites of mine. Wish I could get a deal like this in the UK

Alick, isn’t just grand? Customs, market prices by region and all that rot. Systainer and LBoxxes are two good examples. From what I gather they ready available in England and Europe for decent prices. In the States, LBoxxes start at 50 and escalate rapidly. Oi.

Snagged the linemans and the ergos for about $10 each.

Wow! They must have marked them down even more. I may have to look at those ergos again.

The side cutters are about $20 at my local Lowe’s, didn’t get em… Yet…

I haven’t seen the side cutter drop much below $20 at any Lowes I’ve been to. Although I did pick up the Ergonomic pliers for $7.50 and the linesman’s for $10. 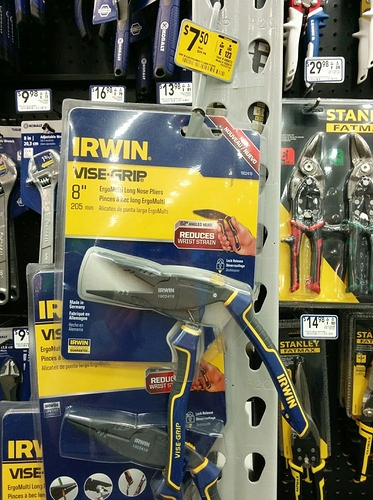 Trip back to Lowe’s today maybe.

Thanks! One of the Lowe’s stores I go to had the the pliers for under $6, both kinds. I ordered online and hope they still have them. It’s further away for me but I go out that way sometimes. The closer one didn’t have such great prices though still reduced. Lowe’s does this sometimes. My guess is they are closing them out. I would have gotten more for gifts, but they only had 1 or 2 pairs of each.

I already have the cutters, but will keep my eye on them and get an extra if they get reduced from the $20 price at both stores.

Called every Lowe’s within 30 miles. All sold out. And the price was down to 9.99 for the ergos . Day late and a dollar short.

The store with the under $6 cancelled my order since they were out apparently. I did get them for around $10 each for both kinds of pliers, though the cutters weren’t under $20. Still excellent at that price if you don’t have them already.