I was getting new tires put on so I decided to take a walk. I found a pawn shop that specializes in tools. They had the usual run of pretty beat up tools, and cheap never used tools. They had a few things that caught my eye.

First was a Bosch 18v drill with a battery and charger, no case. It was visually rough looking, covered in white overspray, and a little rust in the chuck. They wanted $40 for it.

Next I saw a Milwaukee M18 drill. This appeared to be the standard $99 kit Drill, charger, 1.5Ah battery, case, but it had an extra 4.0Ah battery. They were asking $90 for everything. The thing looked brand new, I don’t think they even took the twist-ties off the charger.

They also had an M18 impact drill that looked like it had just come in.

So I’m curious what you guys/gals think of pawn shop tools. Are they worth the risk, or is it better to just find something on sale? How does a warranty work when buying second hand like that?

I’ve always been wary of pawnshops because I’ve heard a lot about people pawning stolen tools. I’m sure most pawnshops do as much as they can to prevent it, but how are they really going to know.

When I have visited pawnshops, I’ve been terribly disappointed by what they charge for the tools. I’ll see beat up tools that they try to sell for 75% of retail and newer looking tools that I can buy elsewhere for cheaper. It’s the same for most of the stuff in the shop, but it seems more of a problem for tools. The worst case is when they sell some really cheap brand like Harbor Freight or Menards house brand (or even lesser quality) for premium tool prices.

It could just be where I live. I’ve read about many contractors and makers getting great deals at pawnshops.

I have no idea where there is a pawn shop in my neck of the woods - but I guess I could find the closest one using the Internet. I think that the Internet has probably changed their business like most everything else. The pawn broker can do a quick search to help set prices and get a feeling for value - but so can the prospective buyer. They have to make money - so they need to offer sellers much less than what they might get via a private sale to the end user - and their initial asking price for buyers is probably set higher than market. Maybe you can get a good deal if the item has been hanging around for a while and you’re good at haggling. I would also expect the same could be true of eBay or Craig’s List - but I have no experience with buying tools via any of these sources.

Buyer beware, once at a pawn shop, once on craigslist, I bought 5.0 amp batteries (DeWalt). They looked very new. Then when both of those batteries crapped out on me, I got curious. My wife has her masters degree in electrical engineering, she took the batteries to her lab at work (where there is all kinds of fancy diagnostic equipment with names I cannot spell). Both batteries tested 3 amp hours under load. Fair disclose I do some consulting for loss prevention analysis.When I took one of the batteries to my authorized service center they said they could not warranty it as the screws had been tampered with, implying the case had been opened. My conclusion. Someone had some heavily used and abused 3 amp batteries past their warranty: Bought 5.0 amp batteries, and swapped the cells. Basically, keeping the their new 5.0 amp battery in the old 3.0 shell, and then selling the spent cells with a brand new 5.0 amp case. Or as Matchbox Twenty puts it, “same old trailer trash in new shoes”. Not to say this is the case every time, there are a lot of reputable pawn shops and deals on CL. Just buyer beware.

The one time I went into the local pawn shop here in town, they sell used tools for new prices. I don’t think I’ll be back. Pretty sure the rest of the stuff in the store was marked the same way.

I regularly check the local pawn shop for odd and end tools, such as an Irega 15" adjustable wrench for $5 dollars. Aswell as some random Snap On, or SK wrenches.

Recently I had an unusually desperate day and took one of my nicer power tools in to attempt to make some money. This item was in brand new barely used condition. The Pawnbroker looked the item up online, and saw that it sells for $160 at home depot…he then proceeded to inform me of said information and tell me that they generally pay 10% of retail regardless of condition. I informed him that with profit margins such as those he was an even less respectable business man than most use car dealers I know…pushed him up to $20 and (to my external shame) took the deal…desperation makes people willing to take deals that they would scoff at under other circumstances…pawn shops make their money by exploiting this desperation in their customers, day in an day out.

I’m sorry to hear that. I think we’ve all had at least a similar situation. That being said, craigslist is a slightly better option than that, at least around me. Our local police department recently setup a specific spot at the station that has 24 hour surveillance just for people to use for craigslist exchanges.

I was thinking ‘how come craigslist hasn’t put pawn shops out of business’ , but then remember that they actually post a ton on my local craigslist. Quick money is still better than no money most days.

I have many tools that I’ve sold when I was short on cash, and now wish I had back (drill press, bench sander), but its also all just stuff at the end of the day.

The Pawnbroker looked the item up online, and saw that it sells for $160 at home depot

Have you gone back to see what he was going to price it at? Wouldn’t be surprised to see him asking $150 from my experience. 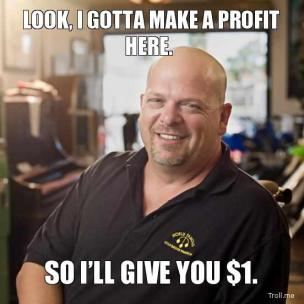