Was watching a Doug Demuro video on the new 935…I was interested to see that Porsche ships spare parts and tools in their own Porsche-branded systainers. Not that I would expect any less on a $1m car, but still a cool touch! 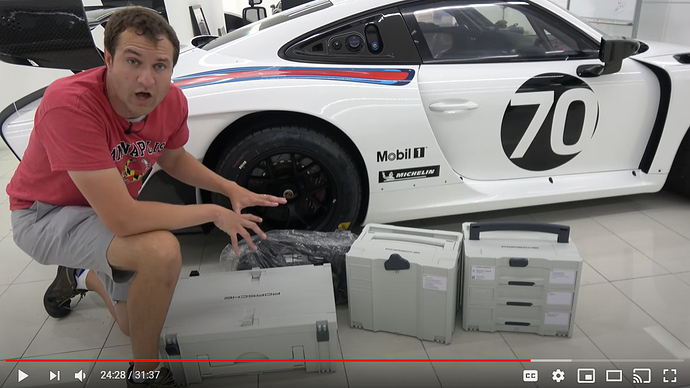 It’s “rebranded” (patented, I believe expired now) FesTool system called “T-lock systainer” and “” x or else " lock" many other brands made boxes. Best for choice of colours (to match your Porsche) would be Tanos.

Did he mention the tool kit too. If memory serves right Porsche has an agreement with Hazet. Last time I saw a guy racing a preped porsche cayman techart he had a porsche tool kit to go with is parts tree. (picture a trailer with systainer rack on the wall and another cabinet/rolling cart secured to the front wall.

Anyway what I liked was they took the time to put together only the tools needed for the car specifically. with a few duplicated for things that either might need 2 wrenches or things that are common use. IE 2 3/8 drive ratchets.

I know the centerlock tool for the wheels came in one, but not sure what else. Apparently the 935 comes with a $250,000 spare parts and tools package, so I’d imagine there’s something similar with this one. It’s a really nice approach, even if the obviously cost merits it. Makes me drool, especially when I’m slinging a couple of t-staks and a harbor freight jack in my trunk and my back seat has wheels and tires in it just to autocross my E90…

So I used to SCCA race a Holden Monaro (pontiac GTO). And I would put a HF al race jack in the back and my green John Deere Tool box (2 drawer with a top lid) and a special took kit I made up. But if something real broke - well that was that.

I had few spare parts mostly becasue I couldn’t carry them - in the car when I drove to an event. If I had had a trailer setup even just a basic car trailer and used a truck to tow to an event -then I would have had so much more. Had to buy tires one sunday just to get home. Not Fun but it was fun to do.

Tanos has always made Festool systainers, it’s just that now it’s not an exclusive araingment.