Hey all. I just joined the forum and realized that I have something that might be worth sharing. Yesterday, I was in the Lowes in Clemson, South Carolina and noticed that the 1 3/4HP Porter Cable Fixed Base Router (9690lr) is only $53.64 marked down from $149.00! I am not sure what the situation is or if any other stores are doing this, but there were 3 in stock, all brand new. I might go back and snag one.

I looked online and it is showing as $149 on both lowes.com and amazon.com. It’s not the most powerful router out there but would be a great backup to my Bosch palm router in my shop I’m sure. It would also be nice to leave a regularly used bit in it so I don’t have to change bits or I could permanently mount this one to a router table. Ok I think I am convincing myself to go buy one!

Hope this helps someone out there and if you find one in your local store, let us know. 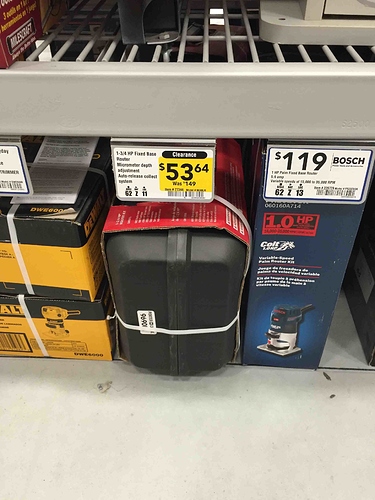 Just went by 2 Lowe’s by me and it wasn’t on sale. One had it at normal price, and at the second they weren’t selling them at all. Maybe they are trying to get rid of inventory cause they aren’t carrying them anymore? I’m going to see if my brother cam snag one from up there.

Oh bummer man! Sorry to hear that. I am going to swing by the one here in Clemson later and see if they still have them.

The Lowes nearest to me in Blaine had them on “Clearance” for $139.

I’d snag it - at that price its a steal

Had to check here (Wilson, NC) because of course I’d buy it at that price! No such luck. Regular price - $149.

Sorry about that guys! @benjamenjohnson @DH1

Found one earlier at the Sam’s Crossing location in Columbia, SC. They still had the display. That was the only area store that seems to have them marked down so much.

Anyone try HD price match… Worth a shot?

@Fm2176 did you get the last one? It says they are out at that location online.

They sold out, but I got them to sell me the display at a discount because it was missing the chuck.

I guess Lowe’s is discontinuing this model. Has anyone heard of a replacement from Porter Cable?

Guess I you know now, but yes, they had the display left. It makes sense that Lowe’s is no longer carrying this model, since most stores don’t even mention it. Oh, and I’ve found that most Columbia area stores show clearance items as not being in stock for some reason. The Kobalt hammers and Bostitch chisels were showing as such a few weeks ago despite a few being in stock.