I am a AV tech and have more tools than I know what to do with. One area where I have never been completely happy is with precision drivers.

I used to buy the Husky 8-in-1 driver from The Home Depot (red cap version), in like 3-4 units at a time because I kept losing bits and caps fall off in tool bags. They were cheap enough where I didn’t mind it and I stashed them wherever I might need them. The downside is the bits seemed cheaply made and didn’t “grip” screws very well sometimes. The new version is grey/white/black and is nowhere near as nice. The handle is fatter and the bit storage is lacking. These bits also seem worse.

I keep thinking about ordering a nicer set from Wera or another german tool company, but I’d much rather like a unit that stores bits INSIDE the handle and doesn’t have a separate bit holder or case. There aren’t many of these out there.

The other thought is to order two handles with changeable bits and equip with the sizes I use most often, and keep alternate bits with the rest of my 1/4" bits.

Another thought is to just get fixed size drivers that I use most often and keep something else for the oddballs.

I actually really like the stuff I got from iFixit. Specifically, this set:
https://www.ifixit.com/Store/Tools/Pro-Tech-Screwdriver-Set/IF145-239-1

On the first set, the handles are great, soft, and the tips seemed very well made, and provided good grip. The downside is there is only one size slotted driver. Does anyone know who is OEM for iFixit?

On the 2nd set, I like the chrome bit holder a lot, but don’t like the separate bits.

I spent a healthy chunk of my life installing home theater and commercial AV systems as well as TV repair, I know all about your woes… I too fiddled with all kinds of cheapo precision drivers and never did find any I turely liked and still don’t have a set that I care for. However @ToolGuyd is very well versed in all things screwdriver and hope he chimes it. I personally like individual drivers but as a tech a compact kit is definitely the way to go and suggest you take a peek at Wiha too like this kit: https://www.amazon.com/gp/aw/d/B0000WTBO4/ref=mp_s_a_1_3?ie=UTF8&qid=1486418286&sr=8-3&pi=AC_SX236_SY340_FMwebp_QL65&keywords=wiha+precision+screwdriver+set&dpPl=1&dpID=41NRHoMepAL&ref=plSrch
Another great site to check out is: https://www.kctoolco.com
They have alot of high end hand tools.
Good luck.

I think I found a worthy replacement to try…

I’m ordering and giving it a go. Klein has got be better made than the Husky (old and new)… although the bits look very similar. I do like that I don’t have to remove a cap to change bits.

I know you are looking for a bit set and driver handle so will not try to dissuade you from it. I would add though, if you do decide to try individual drivers the Wera precision are about the best I have used. Like many things ‘best’ may come down to how a driver fits your hand. Wera ’ s handles fit me really well and the tips are superb.

For small and even fairly large phillips drivers, I really like Wiha. I haven’t found anything better. I recently got a set of small Wiha Torx drivers and they seem to be very nice but given that the set is from T5 to T10(?) I probably won’t use them as much as the many phillips drivers I have. But when you need something silly small like a T5, I think you’d appreciate having a nice one that actually fits properly.

The Klein 4-in-1 is fantastic. The bits are actually exactly the same size/shape as the Husky, but they seem better made. I’ll see how they hold up over time. You don’t get 3x double sided bits like the others, but I can live with that. I like the length and the grip on the handle.

The Klein 4-in-1 were stocking stuffers last year from me. 1 recipient did not like it - 2 others - no comment. My son in law told me that the flat blades were brittle and chipped with only moderate torque. . Maybe we got a bad batch.
I generally prefer Wiha or Wera - European-made screwdrivers - over what I’ve seen from Taiwan - like this Klein. But for the $9.97 I paid for them at Home Depot - but they are a bit more on Amazon - it wasn’t a bad stocking stuffer.

I’m a big fan of Wera and Wiha.

How about the new PB Swiss Insider Mini? 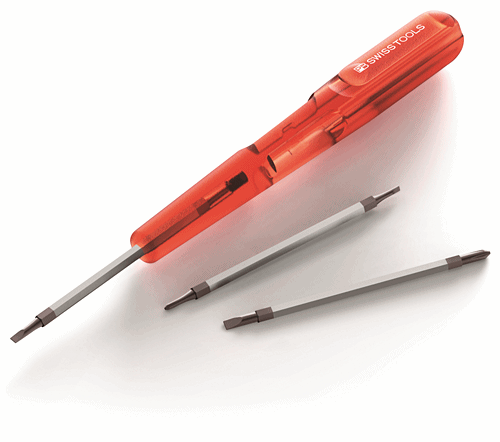 I had a nice post all typed-up to recommend that you go with Wiha tools for precision drivers, but it wound-up sounding like a damned commercial.

Just save yourself some money and wasted time, and go with Wiha.