Small parts organizer that are deeper than usual?

Hi friends, hope you’re well. I’m looking for a small parts organizer that is deeper than what I usually see.

Any tips (esp cheap/affordable like those HDX) would be appreciated, and open to any used or non-obvious suggestions like plastic storage boxes from outside the ‘tool’ industry (camera storage, tackle boxes, etc).

My Milwaukee Packout “Parts Organizers” have removable bins that are nearly 4" deep. The small bins are 4" square, and the big ones are about 4" x 8".

There are two sizes of organizers, the 5-bin that’s 10"x16", and the 11-bin that’s 20"x15", like an attache case. They’re more expensive than your HDX models, but they’re probably much sturdier. They also stack and lock together, like that little HDX.

They also have a “Deep Organizer” that uses adjustable partitions instead of removable bins, that’s 7" deep.

Ridgid makes a cheaper one that’s 5" tall, but I haven’t used it.

Husky and DeWalt might make something like it too. You might go to a well-stocked Home Depot and check them out in person, to see if they’ll work for you.

For an improvised solution, you could make bins by cutting up plastic juice or milk cartons, and buy or make a case. Put a piece of foam rubber inside to seal the bins to keep stuff from falling out.

Cheers brother, thanks for the quick response! Those Packouts look good but I’m afraid they might be super overbuilt for my home needs, and heavy to shlep around. I’ll have a look!

The Dewalt Tstak / Craftsman Versastack are fairly affordable and the bins are roughly 5" deep. I believe they also make a deep version of the Pro organizer with the same bins.

This is the deep one (they make a shallower one - listing says 4.6" overall depth, not sure about the actual bins): https://www.homedepot.com/p/DEWALT-TSTAK-V-7-in-Stackable-9-Compartment-Small-Parts-Tool-Storage-Organizer-DWST17805/204404400

The Craftsman one is usually a few bucks cheaper, but not in stock right now.
https://www.lowes.com/pd/CRAFTSMAN-VersaStack-System-7-Compartment-Plastic-Small-Parts-Organizer/1000566683

And I was wrong…the deep Pro uses the same bins as the shallower TSTAK one (should be about 4" deep):
https://www.homedepot.com/p/DEWALT-10-Compartment-Deep-Pro-Small-Parts-Organizer-DWST14825/203367153

The Packouts are sturdy, no doubt, but they’re not heavy, and the handles and latches are sturdy and well-made, which is a convenience thing as much as anything else. If you ever have to wrestle with latches that have been bent or knocked out of alignment, you’ll know what I mean!

But the Ridgid or Husky options might be less well-built, if that’s what you want.

DeWalt’s Tstack system that indianajonesy suggests is flimsier The annoying thing for me about DeWalt’s system is that there are three or four of them: Tstack, ToughCase/ToughCase+, and Pro (I think), all not compatible with each other (I think.)

But I did buy this DeWalt parts organizer just because it was $10 (and still is, looks like.) I haven’t even taken the stickers off yet, but the bins are about 3.5" deep.

Dewalt’s parts organizer is on sale for the 2021 holiday shopping season!

BlockquoteDeWalt’s Tstack system that indianajonesy suggests is flimsier The annoying thing for me about DeWalt’s system is that there are three or four of them: Tstack, ToughCase/ToughCase+, and Pro (I think), all not compatible with each other (I think.)

Agreed with the flimsier call, but they have held up well for me with some relatively decent abuse. I did cave and buy some Toughsystem (their direct competitor to Packout) for some of my bigger stuff like my router and saws, but I also have adapter feet on a few of my TSTAKs that I 3d printed (they’re on Etsy as well) so I can mix stacks. Also, the large Toughcase + connects to TSTAK and then can connect small and mediums on the large. It’s confusing, annoying, and if I had to do it over again, I’d probably go Packout (both Packout and Toughsystem came out after my initial purchases). But if you want medium-duty storage as a homeowner, the TSTAK is perfect. The most annoying thing is that those awesome Pro parts organizers don’t connect to anything but themselves!

It’s annoying, it’s true. But that’s how they getcha!

If I were starting over, I might go with DeWalt Toughcase, because the little drill cases and such seem to slot right into them, and then you’d have a totally integrated system.

But a few Milwaukee tools came with Packout cases, so…

You know, the more I think about it, the easier it seems to build something.

You just need a flat box. The narrow sides can be 1x6" wood scraps, or maybe 3/4" plywood. The wide faces can be whatever thin cheap sheet material you have, like lauan paneling, 3/16" plywood, masonite, formica, etc. Make the box closed, cut the lid off with a table saw or band saw, then add a hinge, latch and handle. The hinge you can improvise from leather, nylon webbing or even a tough piece of plastic, like a milk jug. The latch can be just two screws and a piece of cord to wrap around them, or two pieces of velcro. The handle can be a strap or a piece of inner tube. Add a thin piece of material (steel, plastic, formica, etc.) around the inside edge of the box to keep the lid aligned. Fill it with tin cans, cut-off water or juice bottles, etc. Maybe fit a piece of foam or carpet padding to the inside of the lid to seal the containers and keep stuff from spilling out. And Bob’s your uncle!

Not a terrible idea but this has to be something pretty mobile. One of those Versastack or Tstak or Deep Pro or a million other confusing ones should work for me

This seems like a great deal but seems like its just not possible where I am? I cant order it shipped and it basically isnt available in the store 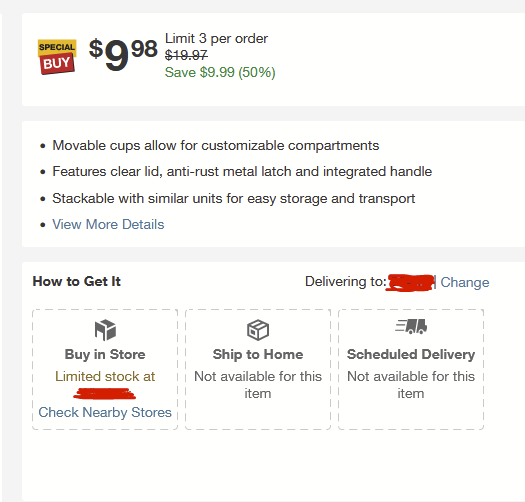 Or I have to drive there (around 15 mi) to confirm

Too bad about no shipping. Is that the only store nearby?

But I’m sure more are coming to the store. Is it available for pickup? If they’re a competent HD, then when more arrives they’ll pull one aside for you and notify you. (The HD nearest to me is not a competent HD.)

Or I guess you can check out Amazon, Ace Tools, or other retailers.

mine is one of those definitely NOT competent ones… well meaning employees lost in mazes of aisles, stuff being unloaded all the time from pallets, understaffed, etc. i’ll just swing by there and see what i can find!