I have owned a set of craftsman screwdrivers for 20 yrs or so, made in good ol USA… about 3 yrs ago while getting ready to put tools in long term storage, I decided to spray my entire tool chest down with lubricant and used Super Slick Slick Stuff…
Well now my craftsman and ONLY the craftsman handles all have a disgusting smell kind of like rotten cheese.
Other brands of screwdrivers, torx, nutdrivers have no issue .

I have tried soaking in vinegar overnight, and wrapping in motoroil soaked rags… The stink remains and makes the whole tool box reek. I changed out drawer liners and have tried baking soda…

It may be that whatever chemical reaction took place is not reversible. You might try contacting Western Forge or Pratt Read - two possible OEM’s for the screwdrivers to see if you can learn what materials the handles were made from. Re Super Slick Stuff - its MSDS sheet is a bit hedgy (as expected) about what ingredients make up its proprietary formula. When I think of rotten cheese - ammonia compounds come to mind - but your vinegar wash did not either penetrate or neutralize whatever compounds were formed. If the smell is closer to that of sulfur compounds like the mercaptans in natural gas odorant - you might try soaking in hydrogen peroxide (pharmacy strength not rocket-fuel strength). I’d say try chlorine bleach - but if the handles were made from Acetal - they will be susceptible to chlorine damage. I also thought that an aqueous oxidizer like potassium permanganate might help.

I’ll try the peroxide treatment 1st, then try contacting the mentioned companies… thanks for the advice. 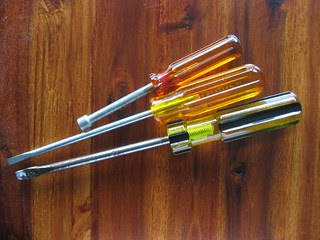 Why toolboxes and tool handles stink.

For years I've encountered this issue, and it always perplexed me: why do a lot of toolboxes stink? I had always assumed it was related ...

In many of AvE’s YouTube videos he mentions rubber tool rotting smells and what causes it, for the life of me I can’t remember exactly what it is.

If it is indeed butyric acid or a butyrate that’s causing the stink - a potassium permanganate solution might oxidize it.

Are these the regular old plastic handle, typically kind of clear and red colour? If so it is a well known issue with C’man screwdrivers. Mine all have it and withouttrying to be gross, it smells almost like someone chucked up in my tool box. I leave them out now to tame it down. Don’t know if there is a cure.

If it smells like vomit - then its probably Butyric (Butanoic) Acid that’s been formed. Getting rid of it is probably not worth the trouble or danger (as in trying to convert it to its sweet smelling methyl-ester form)