I am looking for some good quality reasonably priced flashlights. Will probably buy 4 or 5 for wife and kids to keep in their cars, maybe one in the house. So many options on Amazon and difficult to know if reviews are genuine or not.

There seems to be dozens of vendors offering the exact same product, example below.

Are the multitude of these apparently identical flashlights all from one OEM? Are they any good? Some vendors are claiming 1000+ lumens! True or just marketing BS?

Any other recommendations.
Thanks.

This one, like other things on Amazon has had some pretty good price swings. Looking at it on Camel-Camel-Camel it’s been as low as $6 or so:

Also I don’t know where you and your family live, but most Lithium Ion batteries don’t do well in the cold. So if you live in Minnesota like I do, for a good portion of the year, I wouldn’t rely on a rechargeable flashlight that’s been sitting outside in a vehicle.

As you observe, most things like batteries that depend on chemical reactions for producing energy do not do so well in the cold. Both Van’t Hoff and Arrhenius proposed equations that relate the dependence of chemical reactions to the absolute temperature. In essence chemical reactions slow as temperature drops. I’m not sure about the activation energy difference between a LiIon battery’s chemical reaction and that for an alkaline battery - but both chemistries kinetics will slowed by lowering temperature. Your observation about LiIon batteries suggest that their chemical reation may have a higher activation energy, While the temperature of Minnesota winters do not quite get down to 0°K (absolute zero) - having camped out as a young man in winter in Voyageurs National Park - I can attest that flashlights need to stay warm from body heat in your sleeping bag if you expect that they will work.

You got me thinking fred and I thought I remembered a discussion like this. As usual, Stuart has already written about batteries in the cold and it seems Lithium Primary (one time use, not rechargeable) batteries might be the way to go.

And I didn’t mention them specifically, but I kind of implied that alkaline batteries might perform better in the cold. I stand corrected, they probably don’t.

Stuart’s discussion back then was also more enlightening about electrochemical reactions and the applicability (or lack thereof) of the Arrhenius equation and possible other phenomena (possible ion diffusion and internal resistance?) that impact cell output as a function of temperature.

I can’t say I would buy one of these for each family member, but the Coast HP8R is my favorite flash light ever, even if it doesn’t include a red LED. It takes either 4xAAA’s, or an included Lithium-ion battery that can be charged from a micro-USB charger. So convenient. It is also extremely bright, more so with the Li-ion pack, and is also focus-able. There are 3 levels of brightness. I don’t have super large hands, but it was a perfect fit, and had a solid feel to it. Highly reccomend

I got mine on sale at our local grocery store (Meijer) on sale for $60 last week, normally $80, plus 20% for cyber Monday. I went back and picked up a 2nd after loving it so much, and aside from a Milwaukee M18 stand light deal too good to pass on, I’ve never bought such an expensive flashlight.

My personal view on LED flashlights is that many cheap ones are better than a few fancy ones. I also prefer AA or AAA celled lights, because I can replace cells faster than charging them. And as pointed out earlier, with AA or AAA lights you can choose your chemistry (including rechargeable or non).

Though I do have one rechargeable (got it as a gift), and it’s also pretty cool. It just plugs directly into a lighter port in the car; and has a bright red “charge” LED too - that never turns off. So, for me, it stays in the console box. I’m happy to report that it’s never died, and is always just as bright as when it’s freshly charged. And it comes with a lanyard too.

There is a flashlight enthusiast forum called candlepowerforums where you can find out everything you could wish to know about flashlights.
I can say that I have personally seen many cheap flashlights which claim very high outputs that are patently untrue. I own a number of 1000+ lumen lights and know that these are VERY bright and cost much more than a few dollars. They also have good colour - warm or true whites without the horrid blue green purple tints and bad beam common in cheap lights.
So buyer beware.
Advice is to buy from a reputable specialist brand. Surefire, Fenix, Olight, Nitecore, Sunwayman, HDS, there are many. Absolutely look at Oveready.com for the most amazing lights for people who use them often and depend on them.
The intended use should guide your choice of batteries.
Lithium batteries have been a benefit to flashlights because of their high capacity in a compact size. They also hold charge better than nimh or nicads. So they shouldn’t be dead just from standing for 6-12 months.
Remember that rechargeables do need to be charged with the right type of charger and primary lithium batteries are quite expensive.
If you use a light only occasionally or may have difficulty recharging, then think about one that uses common AA cells or CR123 lithium non rechargeables.
No batteries that I can think of like the cold.

Lastly. You dont always need the highest output. 60 (real) lumens will blow away most of the big old maglights. 200 lumens bounced off the ceiling was enough for a roomful of people to finish their meal during a power cut in a restaurant. 20 is more than enough for close work after your eyes have adjusted to the dark.

Thanks to you all for your input. I will go with the consensus and buy units that take AA cells and use non rechargeable lithium batteries in them.

I am thinking to buy Klarus XT11GT 2000 lumen flashlight. Did anyone use this rechargeable flashlight? Its price is 80 bucks thus I need some information about this flashlight. Do not want to waste my money if it is a junk flashlight.I am telling this because just saw a review https://theeffectiveguide.com/best-rechargeable-flashlight/ where they are recommending this klarus flashlight as the top pick. Thus, I am searching advice for this flashlight.

I never heard of “the Effective Guide” reviews. There are so many reviews online that you can’t trust, so I’m always leary of new sites. Does anyone know if this is a legit and good site for reviews? That might help determine whether the klarus is a good choice.

As a contractor I need a minimum 4-6 hours of usable light. The rechargeable stink. As in you can have mine. It’s ok for occasional quick inspection type use but not work for more than an hour. The best nonrechargeables are the Streamlights but at $20+ for a lithium ion battery that lasts 8-12 hours and gets uncomfortably hit in minutes, NO thanks. So I’m using a Nebo Slyde right now which is the most common flashlight I see. The King is rechargeable but again not enough battery life to matter. I jusf keep the mid size box kf AAAs in my truck door. Cheap and quick. If you go to a work light then you get hours of life as once it’s not pocket sized then just get a light that takes power tool batteries. They sell flash light versions too but they’re hand held, not pocket sized even in big pockets in winter overalls. 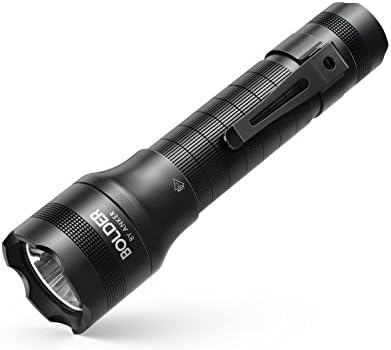 My biggest thing to look for in a LED light is a removable battery. I don’t so much care that it’s rechargeable though that is often a plus - but if it is rechargeable it needs to be easy removable.

Agreed. We just got the Anker LC90 and like it a lot.

The lc40 built in battery is smaller and the peak intensity is about the same.
I like it better especially for edc…

I have many, from no names to klaus, to anker. My lc130 is by far the best for power, but it has a large footprint

I find it absolutely amazing what you can get these days when it comes to flashlights. BudgetLightForum.com is an amazing place because they’ve pushed manufacturers to make really nice lights for not a whole lot of money.

I recently picked up a pair of Sofirn SP33 to give to the inlaws when they asked for some “nice” lights. This thing is big enough to be comfortable to hold while making a ton of light and not overheating or anything. It runs on a 26650 rechargable lithium cell. It’ll do 2500lumens on turbo and 1000lumens for several hours on high. It also has a ~1 lumen “moonlight” mode which will probably run for weeks.

At the other end of the spectrum, we have the Emisar D4 which is TINY. It’s less than 4" long and an inch in diameter and it’ll do 3300lumens on turbo. Sure, it’ll get really hot doing it and the thermal regulator will throttle back pretty quickly, but it is just bonkers how much light this tiny thing produces. As such, it runs on high drain capable 18650 cells like the Panasonic/Sanyo NCR18650GA. I EDC the D4 with the tail cap unscrewed a bit to keep it from burning a hole in my pants if the button on it is accidentally depressed.

My wife has a few battery powered radios that she uses all the time so I picked up the MiBoxer C8 which is a nice intelligent charger that can do anything from a AAA to the newest 21700 and 26650 cells.

As you can probably guess, I don’t even look at AA or AAA powered lights and a light needs to produce at least 1000 lumens to even attract my attention. Generally, you can’t get enough power out of AAs or AAAs for any meaningful amount of time to drive these LEDs at 1000lumens.

Oh and that light linked to in the OP, well, the LED in it is only really rated for 800lumens. I’ve seen ads for it claiming as much as 3000 which is just silly and completely impossible on 3 AAAs.