I see Bosch and Milwaukee seem to be the only 2 makers of non worm drive left bladed saws. Are there any other options out there?

I assume you’re talking about corded?

Bosch and Milwaukee are the only ones I know of, sorry.

In case anyone needs a visual: 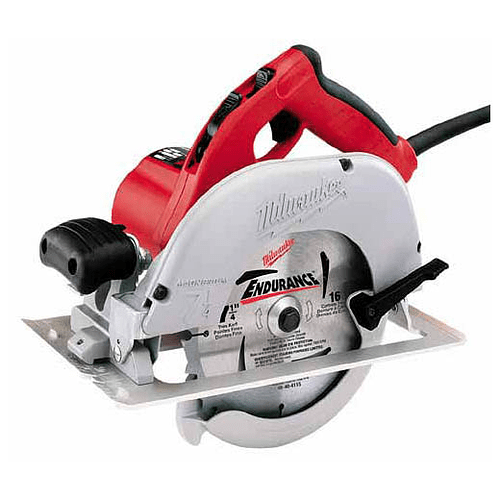 Not sure why you wouldnt want worm drive since they are heavier duty. but if it was me id bite the bullet on a skilsaw magnesium and call it done.

Not sure why you wouldnt want worm drive since they are heavier duty. but if it was me id bite the bullet on a skilsaw magnesium and call it done.

Already have a Bosch worm in the tool trailer, and a left battery powered one. Frankly that’s why I want a “regular” left blade(sorta enjoying the whole line of sight thing). Battery saw is kinda weak, worms are awesome but big and only have so much room in my truck box.

Porter-Cable used to be the King of the Sinister Sidewinders, before Stanley B&D decided to downgrade the brand. Keep an eye out for a Model 743 on the used market.

Also, most of the cordless circular saws are lefties.

Don’t know if it is worm drive but Ryobi cordless is left hand blade.

I guess that the 743K did not sell well enough.
It got pretty good reviews:

But as you say B&D seems to have decided that they did not want Porter Cable to cannibalize Dewalt sales - so they downgraded the brand - what a pity!

My father has that PC saw… I doubt I’ll ever get to even touch it… I might get it in his will at best lol.

The 743K sold quite well. It was in production for 10+ years IIRC. I bought mine about 15 years ago, based in part on a Fine Woodworking review that was a couple years old that referred to the 743.

I have a little story to tell…

Some years (15?) ago I bought a Porter Cable 423MAG, a cousin of the 743K(?) Being right handed, the left handed blade took some getting used to, but once I did, I loved the saw. Lightweight, powerful…

A weekend DIYer, after years of good service, I dropped the saw and the blade guard quit auto-closing. Took it apart and saw that the saw case where guard attached was cracked. Some gorilla glue kept it functioning…until I caught the cord with my foot and it dropped off a sawhorse again. This time I decided to look into getting the part replaced and found there was a safety recall involving the blade guard not closing. Contacted the local factory repair shop, and learned there are no parts available for this saw.

Sure enough, I looked online at a few replacement parts sites and could not find the part available. So I Gorilla glued it again and will [try to] handle it gingerly.

All this to say, I thought a Porter Cable tool would be a lifetime tool. I was surprised to learn otherwise. Our throw away society is pervasive.

Funny how that works, I have a Rockwell-Porter-Cable 9314 (aka 314 trim saw) worm gear saw that dates back to the late 1970’s or early '80’s. Last year I needed new brushes for it - found them easily online (several sources) and many of the replacement part places seemingly had many (different ones at different sources) of the parts still in stock. I guess its kind of a crap shoot about who has new or new-old stock for what.

More of a surprise - there seems to be one of the saws on sale at Amazon:

Guy on the job had one today… soooooo jealous, ran it for half the day and loved it.

Not everything about “the good old days” was good - and I recall a real lemon Buick that I bought during that era - but that trim saw is a keeper. And its tools like that made by Porter Cable that saddens me about what Stanley-B&D has done with the brand. But they did it earlier with the B&D brand with orange plastic-bodies tools - some that were not even recommended for homeowner use. Not withstanding that, I have a B&D Super Sawcat with electronic brake from the same era - that is testament that B&D once made professional stuff under their brandname.