Is this really a righty vs. lefty thing or is there more to it than that? Safety, line of sight?

My beastly corded dewalt is right side and kicks back on me (is it the stock framing blade?), my 18v makita is left side and works flawlessly (6.25").

I read through this topic and didn’t really see a reason on why right vs. left.

I see Bosch and Milwaukee seem to be the only 2 makers of non worm drive left bladed saws. Are there any other options out there?

Couple guys felt compelled to complain about the 60v flexvolt one pre-release:
https://www.amazon.com/DEWALT-DCS575B-Flexvolt-Baretool-Brushless/dp/B01H9BLSW6/ref=sr_1_11?ie=UTF8&qid=1467745422&sr=8-11&keywords=dewalt+corded+circular+saw

I am a right hander but like using left bladed saws, it’s a line if sight thing and frankly I find right sided saws auckward. I really like worm drive saws but they are just heavy to run all day. I find it sad that other than 6 1/2" battery saws and worm drives there are only two “normal” left blade saws to choose from, don’t get me wrong both are good well regarded saws but seeing all the bells and whistles put into less costly right blades bums me out. Oh well Bosch CS5 you’ll be mine one day… and hopefully one day DeWalt make a brushless 20v lefty I’ll own that in a heartbeat, heck I’ll probably still snag the regular 20v anyways.

I think it is mostly a line of sight/ preference thing. Either can essentially be used lefty or righty, but I believe the products are being designed around the idea that people will use both hands when cutting, and that just doesn’t happen. More often than not that ends up being a more awkward position to cut, and you can’t grab the piece of falloff.

Another reason I haven’t heard mentioned, is I believe all track saws are being made blade-right, so I wonder if that has caused any manufacturing or other benefits to making all of their standard saws blade-right.

Yeah my festool tracksaw is a right side blade. I dont understand that either. Still think there is a reason for it, perhaps it is the both hands thing that you said, or perhaps it’s not having an open part of the blade showing your direction.

Maybe framers actually use it lefty and hold onto the piece with their right hands? Could be the nature of the job.

That bosch is a beast. 15A too. I bet that’ll rip through some hardwood all day where my makita 18v would freeze up. When I lean over my workpiece with a right side blade I can still see the leading line of the baseplate for direction so could be it’s line of sight for one handers.

Seems like both of you are on the same page with line of sight. I dont disagree. But there must be some other reason. To protect the left hand on a one handed cut? dunno.

I have a post about this in the queue, but here’s the gist of it:

I believe it’s based on user habits and what they’re accustomed to.

Cordless circular saws are left handed, and it seems they’ve been that way for a while. Left-handed saws give users better cut line visibility.

Lots of urban legends about this topic - but you are probably right - and while the first portable circular saws may have been worm-gear ones (if you believe Skil) - the cheaper first direct-drive sidewinders may have started as right-sided - and it stuck.
One theory - often espoused - is that with a blade on the right - you hold down the work with your left hand, operated the saw with your right hand and the cutoff piece falls away to the right. Maybe this is somehow more natural - but maybe it was just a sinister (from the Latin) plot.
As you point out the corded Milwaukee 6391-21 is still available as an exception - and the old Porter Cable 345 seems to still have a bit of a cult following despite its odd-sized 6 inch diameter blade. FYI - not all worm-gear saws were lefties - with my PC 9314 (AKA PC 314) trim saw being an exception.

What I’ve heard a while back is that right-hand or left-hand has to do with not crossing the blade with your arms.

With a right-hand saw, your right hand is on the main grip, left hand on the aux grip, and blade is positioned to the right of all that. It’s similar with a left-hand saw.

But when a righty uses a left-handed saw, the right hand is on the main grip, left hand is on the aux handle, and your left arm crosses over the blade. The blade is aligned between your right hand and your body. Yes, the cut line is more visible, but it places the blade inside your arms, rather than outside.

In such a position, if your left hand holds a workpiece and your right holds the main grip, you could in theory accidentally put the blade in contact with your left hand.

Another thing, after running a righty that bugs me to no end is having to reach overhand to advance the saw guard, almost garenteeing me to screw up the cut!

I just bought my first circular saw, the cordless brushless makita. Xsh03 I think is the model. After using my dads circular saws for so long (all of them being corded and thus blade right), blade left just feels like the opposite (I mean it is the opposite lol, it just feels different). Maybe it’ll just take some getting used to.

That supports my belief, that full-size cordless saws are blade-right so that they maintain the same feel of blade-right corded saws.

But if most people say they prefer blade left, why aren’t the full size corded ones blade left?

Was just watching Neflix Original, Marvel’s Jessica Jones S1 E2 last few seconds where Like Cage is showing off his powers (he has unbreakable skin) so warning graphic Hollywood Images… 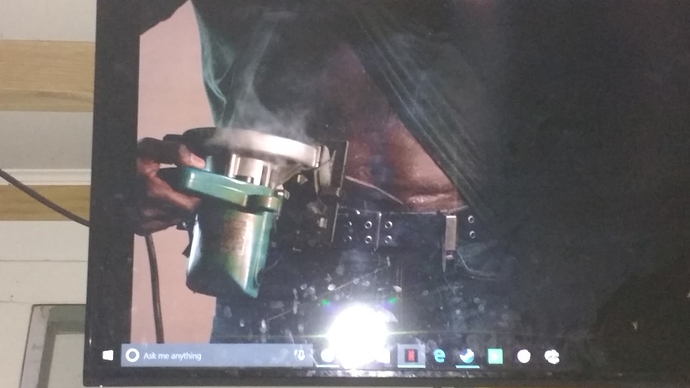 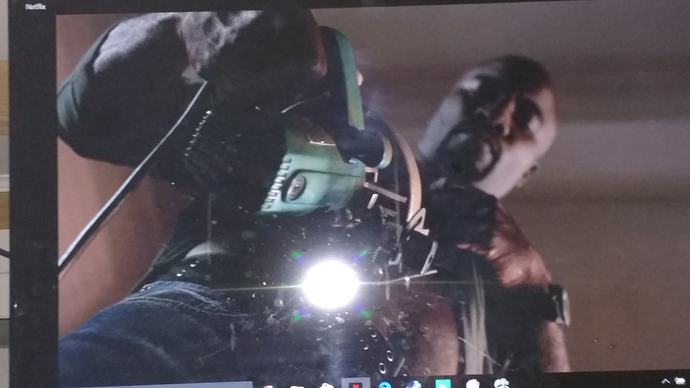 Looks by the color to be Makita and a bit old any ideas of make and model?

Maybe WE start a petition or open letter to the tool companies stating we WANT left blade options. With support from our little community and folks like @ToolGuyd and @benjamenjohnson we might get some traction and get the ball rolling. ???

But if most people say they prefer blade left, why aren’t the full size corded ones blade left?

But who says most people prefer blade left? I do, and a lot of others share in this preference.

But I’m also sure that Dewalt and other brands polled users before coming to the design decision.

We usually hear from a few critics, but I can’t imagine that brands haven’t done their due diligence in checking to see what their users actually want.

Don’t drag me into this

I mainly use a circular saw to break down sheet goods in my garage before I bring them downstairs into my shop. I have a corded blade right saw and a cordless blade left saw.

Added later…
thinking more clearly, I meant that if I’m using the saw on the left side of the straight edge I use my left hand, right side, right hand…regardless of the type of saw.

Apparently, dewalts research found that their focus group preferred blade right when they came out with their 60v circ saw. However, I know of people who will not buy it, even if it is the most powerful cordless saw, because they prefer blade left. Most people I know prefer blade left, so I was just assuming I guess.

Just kidding - but for $3800 or thereabouts - you could alleviate the awkwardness and automate your work with a Mafell:

Right-handed, but a big fan of left-handed saws too. The Bosch CS5 is a great saw. Inlaws got me one for christmas a couple of years ago.