So, I work at a university lab and I generally own Bosch tools. I have a few personal favorite tools I take in with me every day. The lab has a bunch of worn out and tired Dewalt 18v tools. Recently, I decided to look into my options for updating the lab’s tools.

My first option was the 20v max to 18v adapter. I read some reviews and learned that it isn’t compatible with many of the 18v tools. I could understand this limitation possibly due to form factors and such but I was surprised to learn that the adapter contains some sort of active circuitry that causes simple tools like incandescent lights to not work properly. Additionally, this active circuitry vampire drains the attached pack at a surprising rate.

Then I looked into the Dewalt 12v tools since I like their ergonomics and honestly, our lab really doesn’t need heavy, super powerful 18v tools. I was surprised to learn that Dewalt only makes 1.1AH, 1.3AH and maybe 1.5AH packs for their 12v line. Even Bosch USA has 3 cell 2.5AH packs now and the kits have come with the 2.0Ah packs for quite a while now. We occasionally need to take power tools into the field with us so getting decent run time is important to me.

Finally, I looked into Milwaukee and the only disappointing thing I could find was that their M12 FUEL kits all seemed to come with one 3 cell 1.5AH pack and one 6 cell 3AH pack. I couldn’t find a single M12 kit where it came with two of the 3AH packs and definitely no kits including their 4 or 6AH packs. As I understand it, the FUEL tools perform better with the higher capacity packs so why does a FUEL kit even come with the puny pack. Milwaukee should be putting their BEST into the FUEL kits.

Given the options and my preference to keep the tools at the lab a different brand (color) than my own, I think I would go with Milwaukee but I will wait until they have some kind of “buy a kit and get a free X” sale.

Milwaukee’s m12 Fuel stuff gives “near” 18v performance and yes doubling the cells does add a bit of noticeable power. But I wouldn’t write em off because of the kits coming with the lower capacity packs, these will be a significant improvement over the current 18v nicad DeWalt stuff your lab is using. An other path you might consider, since you like DeWalt’s ergonomics, is Makita.

I completely forgot about Makita. A quick search reveals that they would be interesting if they made more tools but their 12v line doesn’t have a jigsaw and I LOVE my little Bosch jigsaw for cutting carbon fiber.

The “near” 18v performance and lighter weight of the M12 Fuel is one reason it rose to the top of my list. The 1/2" chuck is a big plus since occasionally, we do need to make larger holes in things.

Makita absolutely has a 12V jigsaw, I know because I wrote about it. 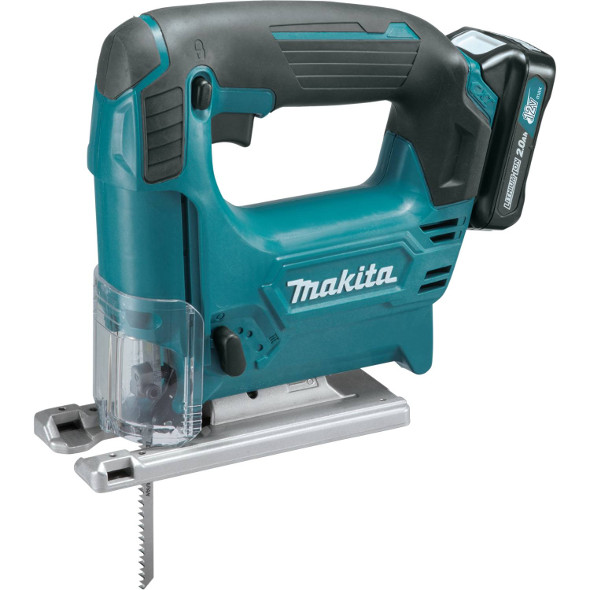 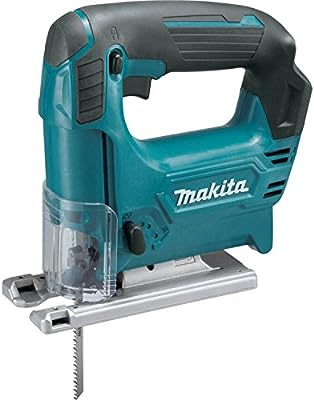 Also I’ve been seeing the CXT drill/ impact combos that were $140 at home Depot for $120 or less. These are not the brushless models, but it doesn’t sound like you need that.

Another Makita option is their new black 18V drill and driver. The 18V Makita drill is smaller than the 12V Milwaukee drill (except for the battery)

29 Likes, 2 Comments - Benjamen Johnson (@electronsmith) on Instagram: “I'm in love. I want a @makitatools XFD11 brushless drill. Not to review, not to test, just own. I…”

I don’t own the new Makitas yet (they are on my short list), but they really feel light and well balanced. Here’s Stuart’s preview: 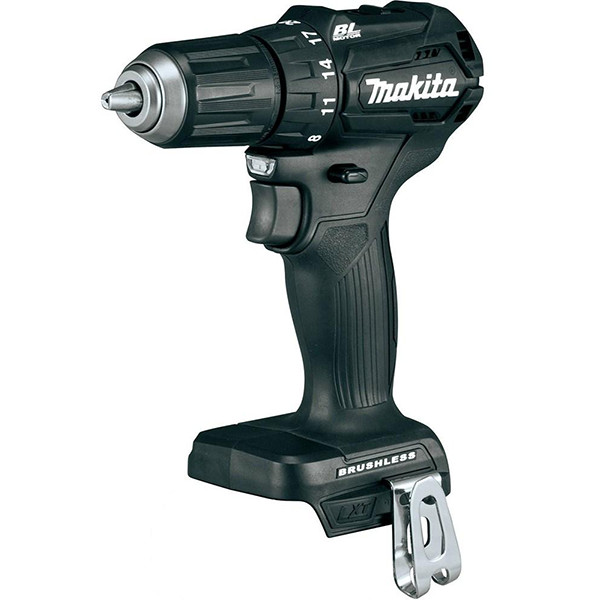 Makita has come out with a new sub-compact brushless drill.

… and I have no idea how I missed those jigsaws on Makita’s website. I do wish they were barrel grip and I’d really like to try out both the Makita and the Milwaukee jigsaws to see how they compare to my Boschs.

I have both the Makita CXT and Makita Subcompact drivers (along with the CXT 3 -3/8" circular and reciprocating saw); in addition to 25+ LXT (18v) tools. In my experience, the CXT works very well for drilling and driving bits up to 3/8" and standard fasteners, as long as you stay away from concrete and the like. In my case (note: I am a tool ‘whore’ and would’ve bought the Subcompact anyway), I purchased the Subcompact to compliment my ‘full size’ LXT drill/drivers (yes plural- see my earlier admission

Would I buy additional CXT tools? Probably not. It’s not that they are not quality tools and they have a place in a home and on the site for some trades; but the reciprocating saw is the same size as the compact LXT model [length and weight (bare tool)] with ‘less power’. Also I thought I’d have more use for the circular saw (mainly use for plunge cuts when repairing/replacing existing hardwood floors), I can accomplish the same with my multi-tool.

I want to reiterate- for most homeowners and some trades the CXT line packs tremendous value and for my money you cannot do better than Makita. The CXT line also offers many of the same tools in 12v as found in their 18v line, including (but not limited to): multi-tool, jackets, job site radio and vacuum among those previously listed.

Going off on a tangent- I would love to see Makita introduce a ‘dual platform charger’, similar to Milwaukee allowing 12v and 18v batteries to be simultaneously charged. Being their new jobsite speaker to run off either platform- I can’t imagine it’s far off. Lastly- since I am asking; they should make a charger that charges more than two batteries simultaneously…okay back on topic.

We really do live in a great time; having access to so many choices. Some may find that annoying but Stuart and team do a phenomenal job giving us the results from performance tests and this forum to bring us together to have ‘positive discussions’ without the normal trolling on most forums! Kudos to the entire Toolguyd team and this community for being helpful and positive in all discussions!!!

I was at Lowes today and saw that they actually sell a Dewalt 12v max 2Ah pack though all the kits appeared to come with 1.3Ah packs.

I also looked at the old 18v (NiCD? NiMH?) packs and thought it was interesting that there weren’t any markings ANYWHERE on them as to what Ah they were. So, I just assumed that Dewalt used the cheapest cells they could find and didn’t want anyone to know.

I’m going to stop by the HD tonight to check out the Makitas.

In other news, I actually sent Milwaukee an e-mail about their kits but I haven’t received a response and honestly, I don’t expect one given that when I called them, they seemed more interested in hanging up on me than actually having me wait on hold and speak to someone.

Supposedly there’s a deal on the Makita Sub Compacts where you get a free 2Ah battery. I couldn’t find the deal though and the employee didn’t know about it. I could have pressed harder, but I was in a hurry.

190 Likes, 9 Comments - Tools, News, and Construction (@hdcarpentry) on Instagram: “I guess sometimes it pays to wait. In this case in free 2.0 batteries. If you were looking at this…”

Any idea what this “with LED” stuff is?

A free battery pack could make that worth it.

Yeah, that’s worded funny. I think they mean it has an LED battery meter – not all Makita packs on the market have battery meters. (although I think all the new ones do)

Seems the free battery deal ended on the 25th.

The little 18v Makitas look and feel very nice but HomeDepot didn’t have any cordless Makita jigsaws and I actually forgot to see if they had any Milwaukees in the store.

The Makita free battery deal is still ongoing; I purchased the kit with it today.

@Prototype3a If you haven’t bought your replacement tools now is a good time to buy the Makita sub compact kit. @ToolGuyd had some good things to say in his preview/deal article: http://toolguyd.com/makita-18v-compact-brushless-drill-and-impact-combo-kit-deal-free-2-0ah-battery/

We finally ordered a kit for the lab yesterday. I also finally went through all our dewalt cordless tools and much to my surprise a few packs still have some life left in them but the box of packs heading out to be recycled is large.

What did you end up with?

The compact Makita kit. Silly charger almost kicked my butt. Couldn’t figure out how to get the pack off of it for a minute or so. LOL

Anyway, I thought it was a nice touch that the charger is both fan cooled and that fan also cools the pack while it charges by blowing air through the inside of the pack.

I was at the HD and took a closer look at the Ryobi packs and I was surprised that their 18v ones are only 1.5Ah and the bigger ones appeared to be 3Ah.

I also looked briefly at the Ridgid 12v system which actually looks nice but it needs some 4Ah 3s2p packs as my Bosch tools have shown me that the jigsaw and OMT can kill a standard 3s1p (~2Ah) pack really quickly.

In other news, I’ve been looking into building some lithium ion 20700 based packs for a project at work and found that you can get really good quality cells for ~$5-6 each in quantities around 50-100. So, these tool companies are making an absolute killing on these $70-80 6 cell packs.

Among the packs I recycled were some Dewalt 24v packs and I popped one open to take a peek inside and those suckers could easily be converted to 20700 cells in 5s2p for a ~8Ah pack… if one were so inclined. Frankly, I couldn’t see a reason why I would ever want to use the giant 24v dewalt drill so I can’t be bothered to mess with it.

So, I’m finally using the new ultracompact Makita 18v today and this drill is AWESOME! It even appears to have anti-rip-your-arm-off tech. It feels like it has more torque than my larger 18v Bosch drill. The only negative thing I’ve noticed is that the chuck doesn’t seem to grip as tightly as my Bosch but it does somehow lock up the motor shaft to make tightening the chuck easier. I haven’t A/B’d the two chucks gripping the same drill bits yet but I am going to have to test this some other day.

NICE! I’m glad your liking em, If I wasn’t so deep in yellow I’d probably be an owner. Makita was on my very short list.

At this point, I’m tempted to say that the Makita ultracompacts are far and away the best compact drill/drivers on the market right now. M12 fuel could probably beat them if they just shipped their kits with better battery packs but out of the box I think Makita has everyone beat.

I was drilling some holes today that I couldn’t have drilled with any other tool because I just wouldn’t be able to get the bit into that tight of a space. I was also blown away by how they just kept on going even after the bit was completely jammed with wood and aluminum chips in a deep hole.

Kids at the lab are (mostly) off on spring break so I was using the Makita again today and I actually found that the grip hurt my hand. I haven’t been able to figure out why just yet but the handle on my Bosch drill is much more comfortable for me.