[Updated] Anyone tried the new ryobi garage door opener? [I have]

It’s probably the slickest new thing I’ve seen come out recently. And while I don’t buy ryobi this has me thinking.

Thoughts anyone? Home depot reviews say the biggest issue is the legal required beeping and flashing for the 5 seconds it takes to close. They say it’s due to wifi but I suspect it can be updated through a firmware update to at least be optional, as that safety feature is more for those who are deaf/or blind. Though maybe they figured that included those of us who don’t wear proper protection in the garage.

It has already garnered a batch of reviews on its Home Depot page:

Yep! I mentioned above that the biggest complaint is the beeping sound. So I’ve read through those. Wanted to hear from this community.

Went ahead and bought it with the free cord reel attachment. I’ll post a pic and update later for anyone who’s interested.

I know not much time to respond couldn’t help myself when staring at it in store.

Maybe too new for us. I have no need so I have not looked at it - and it would only work on my rear-side door anyway - not my 20 foot front door.

Let us know how you like it. I am really interested, as I have a double garage, and could get two, and solve several of my problems in one swoop (lighting, power, speakers, wireless controls).

If I were re-building my house it would never have the 20 foot wide mahogany door that I bought it with. The big door is just too hard on the cables and pulleys - even though both are much heavier than typical. Its lift springs are as big as any I’ve ever seen and its gone through one opener on my watch - but the fairly new 3/4 HP Liftmaster manages to raise it up - I’ll see how long it lasts. My other single door - has a 30+ year old Sears chain drive opener - that other than having had some modern safety interlocks added works fine - although less frequently since its at the side of the garage in the rear.

Having trouble getting it installed. Posted a help question on Reddit which can be viewed here: 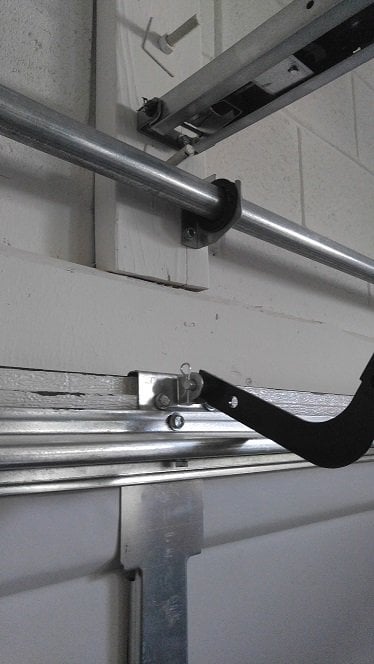 r/HomeImprovement - Cant install garage door bracket what do I do?

I just don’t trust that panel to bolt my door bracket onto.

Ok have it installed and working (base unit). Modules going up tonight, and wifi setup which I understand to be the biggest issue with this tool.

The belt is very quiet, liking it so far, but would like to reduce the door noise/wobble if I could. Will try to see what the issue is or if it’s just the door.

Beeping occurs even when closing with the indoor wall unit. Bummer but not annoying like people claim.

Ok! So fully installed, been using it for a week with accessories. Here’s what I’ve found:

Install took longer than I thought it would, removing the old GDO, sensors keypad, and brackets. Then installing the new unit. If I had to do it the next time, I could probably do it faster. But I’d rather pay a guy to do it for me.

Of course you can get a fan and cord reel separately… But it’s pretty slick to have it attached as part of the system and accessible through the app, etc. Who knows what future attachments they will think of?

Was it worth it? Sure if you are in the market. I wasn’t really, but was tired of my Genie chain driven tiny unit being as loud as it was. Will other competitors come to market with something similar? They’ll try but I’d be interested to see if Ryobi has patents on this modular design.

My overall experience was that it was fun, it WILL be useful, and it’s just cool to look at.

** Concerning Home Depot reviews on this unit. I’ll be posting something in there too. There are a lot of noise complaints about the door close feature, and complaints about Wifi setup. I dont know if that’s user error or if Ryobi has listened to feedback and improved their software/firmware on their newest manufactured units, but I’ve not experienced those complaints or I dont think they are deal breakers.

I’ve never installed a GDO–never needed one, quite frankly–until about three weeks ago. This was the unit that I installed and have been using since then.

Since I know next to nothing about garage door openers, I did a bit of research. The primary requirement was that it be as low-noise during operation, since the garage ceiling is drywall finished, and there is a bedroom addition on top of the garage; in which, as luck would have it, the bed is driectly over the final installation of the GDO.

After said “bit” of research, I ordered the Ryobi GD200 from Home Depot online on a Friday. It showed-up the following Monday. It must have shipped from a local warehouse; so, all-in-all, not bad.

The installation went better and faster than expected, primarily because I have shelving units in the garage that I rolled under the installation location, and placed the assembled opener lengthwise over the shelving unit. The header bracket went in easily enough, and I mounted the motor/gear head to the beam, secured right angle drilled strap directly to the head rails, and stacked cardboard under the head assembly until it was right against the ceiling. Pretty easy, with the shelving unit doing the stabilizing for me.

(I actually got the outer trolley on backwards, and didn’t discover this until the installation was complete. Whereupon I had to un-install the opener and switch the trolley around the right way, and re-install the unit again. That’s life, I guess)

Programming remotes, and setting upper and lower travel limits was fall-down easy, and getting the WiFi connected was a lot simpler than I thought it would be, judging by what I had read from other reviewers.

Start to finish (even with having to install-un-install-re-install), the whole job only took about 3 hours; and the door operation can’t be heard to any appreciable degree, in the bedroom above the garage.

My fix for this was to replace the dangling wire serving as an antenna with some RG-58/U coaxial cable, and run the cable along the drive beam, and out the front of the garage, above the door header, and mount a magnetic antenna base, upside down, to the bottom of the bedroom through the wall air conditioner sleeve above the center of the door.

I used 806mm (full wavelength for 372MHz) of stainless steel welding rod, and wound the center few inches into a coil, leaving a bit of it straight above and below the coil, and secured it to the antenna base.

Now, the door opens reliably, every time, even with the remote control sitting under the seat, in the car; which isn’t where it’s going to be permanently, but it makes for a good, worst case testing scenario.

I haven’t tried any of the modules, since there isn’t much need for any of them–except, maybe, the cord reel. That’s for another time, though.

Overall, I’m very satisfied with the product, and it’s performance (after the added antenna, of course). I hear that Ryobi has come-up with an antenna kit for such circumstances, should people need it.

Ryobi Tech Support was able to provide the information that I needed to make my enhanced antenna, and was forthcoming about the issues that have been reported with remote control signal reception. Upon that basis, I would recommend that anyone consider this unit for their own needs.

Just bought one of these thing yesterday. If it holds up I’m going to be EXTREMELY happy with it. The only complaint I have is that there was nothing that told me it didn’t come with the mounting bracket. It was the only PITA I had. Other than that it seems like a very solid product. I’m a Milwaukee and DeWalt guy and have always been hesitant buying Ryobi but between this and the power washer I borrowed, the might have better products than I gave them credit for.

UPDATE:
I’ve now had this GDO for over three months. I have only had one issue. Something got in the way of the safety sensor which caused the door to stop (a good thing). I was able to get the door back up but for whatever reason, it would not go back down. CS was outstanding in helping me over the phone. Their suggestion was to turn the sensors 180 degrees (which I admittedly scoffed at) and for whatever reason it worked.
Thought I would share this too… I can be a bit of a perfectionist at times and felt as though I could get the mounting bracket straighter than I did. So, I took the unit down and then… SLIP… and then… BANG! There was the best GDO I have ever had… laying there on the garage floor following a big THUD… I am happy to report that, internally, everything must have survived just fine because once I got everything mounted back up, everything worked just fine.
I love this GDO. Do I wish the extension cord was better than 10 amps? Sure, but most things will work just fine on 10. I can not give a higher recommendation for a GDO.

Love the Ryobi GDO except for the outdoor keypad can not be used to open the door. I have an insulated steel door so I suspect that there is a signal issue. I contacted Ryobi and they sent me a new unit FOC but I had the same issue. The unit will close the door but not open it. Obviously this is inconvenient at times but it’s not really an overwhelming issue as I can use the phone app to open the door.

So I purchased this and installed it. Upon completion I had 2 FOBs a key pad a interior door remote , my built in Jeep opener and the app all cued up and working last night… this morning the app dropped my password and said I was wrong on entering it… had to reset it and NONE of the remotes worked except the app after password reset anyone else experienced this? Oh and the sensors are appropriately installed as well both six inches off the deck and leds both working properly one red one green, green goes out if something crosses the beam.

Try checking the lock. Sometimes its seemed to set itself in travel mode in the app and disables the remotes.