What do you want to see reviewed on ToolGuyd?

We’ve got plenty to do, but I figured I would ask here anyway. Maybe there’s a new or interesting tool that you’re curious about that’s not yet on my radar.

I sent an email through the website not too long ago looking for a review on pistol grip miter saws. Might be too specialized, but I’m a right hand dominant lefty, so most horizontal grip, right handed saws are awkward to me. I prefer the pistol grip as it feels more like a hand saw, and just seems right. I would love a kapex but can’t justify the price tag, and I haven’t found many other good full featured saw with the pistol grip.

The options I know of are Makita, Hitachi, Festool, and?

I think jigsaws are possibly under represented in the reviews, both corded and cordless. Personally I’m set on the DeWalt cordless due to my existing investment in their 20V Max line, but it would be good to understand other options particularly if any have standout features.

Benjamin did a post in January 2015 about magnetic nut holders - and he did one further back in June 2015 about nut starters.
Now I see a new tool being promoted as a #1 new release on Amazon that might be worth a review:

It looks a bit like the old Wilde #610 tool that had 2 opposing jaws that slid apart and then back together via spring action when you depressed a plunger at the top of its handle. It was a nifty tool for grabbing and holding hex nuts - and maybe this Handee Clamp is a worthy successor.

But really Id suggest a 4ft AND 6ft level comparison guide, would be neat to see how the different manufactures compare head to head… for arguments sake lets assume they are all accurate, Id like to see a features comparison.

Fewer knives (note: Tongue in cheek but they ARE just knives after all!!)

I’d like to see a “Essential workshop handsaws recommendations” article.

This year’s World Championship sees reining champions, PB Swiss, facing off against Japanese newcomer to this competition, Nepros. PB Swiss overcame tough competition from its German rival Wera, despite the top Czech players that Wera had brought in to strengthen its side. PB Swiss team manager, Eva Jaisli, said: “We had a tight Swiss grip on the match from the beginning.”

In a surprise victory, championship newcomer Nepros stunned the match crowd when it screwed Wiha into the ground. The Japanese side won convincingly to earn a place in the final against the Swiss team.

All eyes are on the final. It’s Japan versus Switzerland in what promises to be a high quality match. Both teams have players with a one-piece thru-tang blade, hexagonal bolster nut and metal end-cap. Over to your commentator, Stuart … 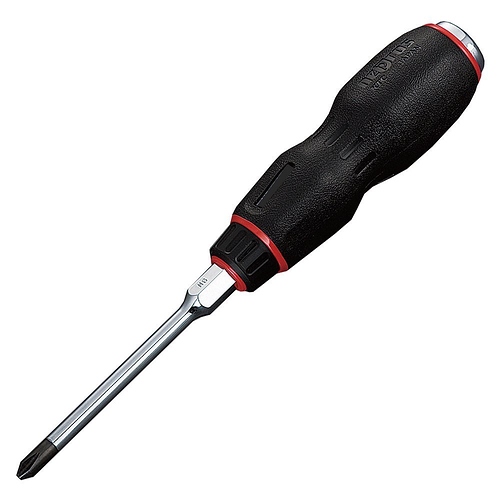 Ooh ooh ooh I got an idea!!! We’ve all seen comparison tests of oscillator multi tools, what Id love to see is a blade show down… those things are expensive and Id love to find out the most bang for the buck! I also love to see some real reviews of some of the unique attachments like:

It blew my mind how much better they are.

Dremel’s accessories are okay, but I would probably only use their more specialty blades and accessories that other brands don’t offer.

Haven’t seen that Imperial before, might check it out at some point, thanks!

I also like Fein’s, but they don’t offer great bang for the buck.

I have enough experience with PB Swiss to say that their SwissGrip drivers are a sure bet. Add a steel cap and hex bolster, and I wouldn’t hesitate to buy it if I were looking for a heavy duty screwdriver.

That Nepros has a neat-looking handle.

I probably wouldn’t do a comparison, but I’ll make a note to check back about doing a Nepros screwdriver review. Maybe in the Spring.

But really Id suggest a 4ft AND 6ft level comparison guide, would be neat to see how the different manufactures compare head to head… for arguments sake lets assume they are all accurate, Id like to see a features comparison.

I rarely use my 4ft level, and don’t even own a 6-footer, sorry. I won’t say no, it might take me a very long time to use new 4ft and 6ft levels to where I can provide any sort of opinion-base comparison.

Fewer knives (note: Tongue in cheek but they ARE just knives after all!!)

I’d like to see a “Essential workshop handsaws recommendations” article.

Hmm, I’ve got some ideas brewing, maybe for a very near future post.

Thanks again everyone for the suggestions and requests!

Excellent test, I musta missed that one… Sadly the Bosch won’t fit my OMT and @$20 a pop it would be hard to justify even if it did fit. My OMT uses DeWalt’s fit. Looks like I’ll just keep picking up the el cheapo ones from HF. I’m still curious of the specialty blades, with spring coming I got a couple roofs lined up and probably going to try out the Dewalt roofing cutter, hopefully it’s worth the $$$ vs hand knifing.

Buffers. Both “bench” buffers (i.e. the ones that look like long shaft bench grinders) and automotive finishing buffers.

Mostly the former, but the latter is likely to draw more eyeballs to the site.

Also, I’d love to see a review, followed by a giveaway, which, of course, I win, of the DeWalt ToughSystem radio.

I’ll make a note to check back about doing a Nepros screwdriver review. Maybe in the Spring.

I think Nepros is interesting for a couple of reasons. Not only is the quality supposed to be exquisite, and I’d be interested in your review after trying a product for real, but Nepros is a Japanese company that chooses to make non-JIS screwdrivers. I wonder why. Are Nepros’ tips closer to JIS or Philips? And how well do Nepros drivers work in Philips screwheads?

Are any other Japanese screwdrivers non-JIS by choice? Vessel Megadora, perhaps?

I would like to see some OBD Scanners reviewed. I’ve been in the market for one for a long time but don’t know what to look for and is it possible to get a good one without paying $400.

Also bench vises for woodworkers. Shoulder and end or tail specifically but if you’re feeling energetic even the leg vise.

A great website by the way. Thanks for you posts.

I wrote about a Craftsman one late last year -

There are some decent models for under $100. An inexpensive reader is better than no reader, although the more you spend, the more features you get.

There are some really really cheap ones for under $20.

Is there a particular model you’d like to see reviewed? I used the Craftsman, and when I have a chance I might try to trick my car or my wife’s into spitting out an error code (gas cap open?) to test things further.

As far as bench vises go, oh boy. I bought a Veritas quick release vise, and will be using it for a new bench build in a few months.

I might work in a Veritas tail vise as well, and a leg vise might be in the plans as well. I’m drooling over Benchcrafted’s tail and leg vises, but it remains to be determined whether I could justify them.

I don’t think I have any interest in a shoulder vise, sorry.

Less expensive vises are often usable, but for my upcoming build, I plan to buy once and be done. Some front vises can be installed quick and easy, but others and other vise styles require major irreversible surgery to a benchtop or legs.

Do you have any specific requests? But to be frank, by the time I build my bench and am ready to start testing other vises, you’ll probably have made your purchasing decisions already.

Thanks for the quick response. I guess I’ll just end up picking a scanner and buying it. Craftsman looks good. Thanks for the suggestion. Maybe I can find a vise at an auction.
Keep up the good work.

I’d be interested to hear about it, if you do pick up a vise at an auction. You generally see things like chisels and planes; I don’t think there are very many older woodworking vises floating around.

Unfortunately, there is a huge price gap between “okay” and “great” woodworking vises. I wanted to suggest you look at Woodcraft’s Woodriver brand, but their vises get mixed reviews with very detracting negative ones.

I see woodworker vises from time to time on eBay. I have 2 old Columbian 3-CD vises - and 2 Wilton vises. They are all mounted on the same bench at the 4 corners - 2 as face vises - 2 as tail vises. The older Wilton 200 and newer Wilton 79A have quick action screws - which have plusses and minuses. The newer Wilton has a pivoting jaw. Both have benefitted from having O-Rings added to their pipe handles - just snugged-up under the end caps - this removes a pinch point and lost of blood blisters on our hand. The newer 79A - was bought with magnetic maple auxiliary jaws and already had the rubber bumpers on the handle. The older 200W - had to have O-rings added - and maple faces screwed on. The old Columbian vises use a spinner-type handle that sticks out a bit more - but is easy to use. If you can find any of these online and they look to be in decent shape - they might be a good buy